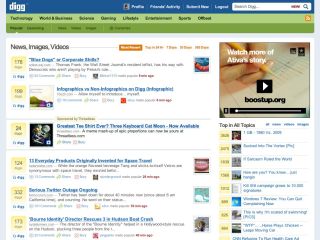 Digg is starting to roll out its novel vote on the advertising system, in the hope of turning popularity into profitability.

The system was first mooted in June, and will allow people to vote for adverts in the Digg pages in the same way as they would vote on a story.

Although the adverts will be marked as sponsored, the Digg audience has proven time and time again that they will not always do what they are told, and the site could be hit with a situation where many adverts are buried and/or criticised.

Of course the reactions of the advertisers will then be key – with many interested in whether companies and agencies will be happy to put their wares up for judgement and pay for the privilege.

However, Facebook are also believed to be considering a similar model for advertising and it could just spell a key change for the industry.