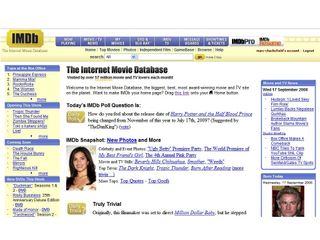 IMDb - not liked by Chinese Government

China has decided to block online movie website IMDb.com, with residents in the country unable to log on to the site since Wednesday.

China's online behaviour has been in the news of late, with Google announcing it is to stop censoring its search engine which may result in the company pulling out of China altogether.

IMDb is renowned as the ultimate website for movie geeks, providing news on all things movie based, but it also allows for user-generated reviews – a type of free speech which doesn't seem to sit well with China's web-based politics.

As you would expect there are a number of movies that China are not happy with, including Borat (because of its connotations to incest), Seven Years In Tibet (surprisingly not for Brad Pitt's awful Austrian accent) and Ben-Hur (because of Christian propaganda).