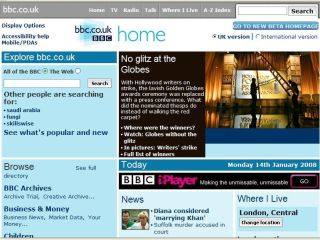 BBC1 will be web-streamed live through BBC.co.uk as of next year, according to the broadcaster’s director general Mark Thompson.

The move was announced today in the BBC's annual statements of programme policy.

Speaking about the decision, Thompson said: “Building on the success of the iPlayer, we want to develop bbc.co.uk to include a broad range of the BBC's broadcast content, as well as new and interactive forms of media that enable audiences to interact with and contribute to the website."

This isn’t the first time the corporation has streamed content via the web, with BBC3 and BBC News currently available live over the net, but it is the first of its 'mainstream' channels to be broadcast in this way.

The decision comes just five months after officially launching iPlayer, a feature of the BBC website that allows viewers to re-watch or catch-up on certain programmes for seven days after they’ve been shown on TV.

There has been no official announcement on a launch date, but as soon as there is one, we will keep you posted.