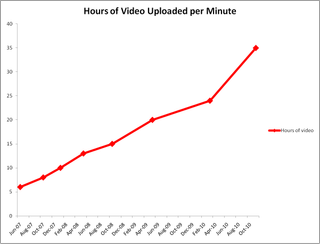 Google has revealed that for every minute that goes by, 35 hours of video is uploaded to YouTube – an 11 hour increase in the last eight months.

The last time YouTube reported on how many hours of uploads per minute there were was when it broke through the 24 hour mark back in March, but the amount of footage being put onto the video giant has continued its explosive growth.

"You continue to amaze us: you've increased the amount of video uploaded to YouTube to 35 hours per minute," said product manager Hunter Walk.

"If we were to measure that in movie terms (assuming the average Hollywood film is around 120 minutes long), 35 hours a minute is the equivalent of over 176,000 full-length Hollywood releases every week.

"Another way to think about it is: if three of the major US networks were broadcasting 24 hours a day, 7 days a week, 365 days a year for the last 60 years, they still wouldn't have broadcast as much content as is uploaded to YouTube every 30 days."

The oft-criticised take down process –where Google waits for content to be flagged before acting – certainly makes more sense when you consider the sheer weight of footage being uploaded.

We wouldn't fancy trying to run a team of people that combed through every second of footage separating the wheat from the chaff.