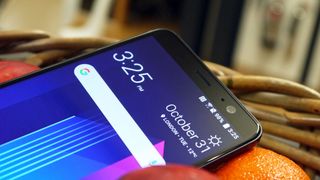 The HTC U12 is expected to launch in the first half of 2018, and if a leaked render is accurate the Taiwanese firm will be changing up the design of its flagship smartphone.

The render in question was picked up by SuggestPhone, and shows a handset that, if we're honest, looks totally unremarkable. It is a black slab with no defining features - but that's potentially a good thing.

With no interruptions on the front of the device, it may mean the HTC U12 has shifted the fingerprint scanner from the bezel below the screen (which we saw on the U11 and HTC 10) to either the rear of the device - like on the HTC U11 Plus - or within the screen itself.

There is also the possibility that it takes a leaf out of Apple's book and drops the digit reading tech altogether, instead opting for retina or face recognition instead.

The shifting (or ditching) of the fingerprint scanner does mean there will be space for more screen on the handset.

HTC is one of the few holdouts when it comes to offering sizable bezels on the front of its smartphones, but the U12 could be the device which jumps on the all-screen bandwagon.

We've already seen this shift start with the introduction of the HTC U11 Plus towards the end of 2017, but its core flagship offering is yet to take the plunge.

In this particular render there appears to be a very slender bezel at the top of the handset, housing the earpiece and front facing camera, but it's difficult to see where the screen starts and stops.

The design doesn't appear to break any new ground though, with HTC potentially just playing catch up, if the leak is accurate. We're unable to verify the source of the image, so there's no guarantee what you see above is genuine.