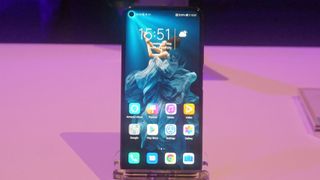 With companies popping up left, right and center to announce their 5G phones, we were expecting to hear the same from Honor, one of the larger phone companies, and now we have.

Speaking at MWC Shanghai, Honor president George Zhao outlined his vision of Honor's 5G plans – and, specifically, stated that the company's first 5G handset will be out by the end of 2019, according to Sohu.

Zhao didn't say anything about the device – if it will be an 'Honor 20 5G', so to speak, or an entirely new handset.

However Honor has said that it intends to use 5G in its devices for purposes young people will find useful, such as augmented reality gaming and AI interfaces – the youth is Honor's target audience after all, so that makes sense.

Judging by Zhao's comments, the handset will launch in China first, and due to uncertainty surrounding Honor's presence in other markets, this seems like the likely course of events. Honor has told us that its 5G phone will come to global markets though, so many other regions should get it eventually.

What is the Honor 5G phone?

One possible 5G phone we could see from Honor is a version of the Honor 20 or Honor 20 Pro, but with a 5G modem.

The Honor 20 is available for sale in most of Europe and it is proving popular, due to its low price and four-camera rear setup, so it would make sense for the company to use this template for its 5G phone.

The more likely possibility, however, is that the 5G phone is the Honor View 30. The Honor View line, most recently the Honor View 20, is released at the beginning of the year, and gives us a glimpse of what to expect when the main series comes out in the middle of the year.

We wouldn't expect to see the Honor View 30 until January, if Honor keeps a yearly cycle, but the View 20 was actually released in December in certain parts of the world – so Honor's 5G phone could come out by the end of the year in China, and then elsewhere in early 2020.

For now, we don't know much about Honor's 5G phone – and we'll likely have to wait until the end of 2019 before much else about it is confirmed.