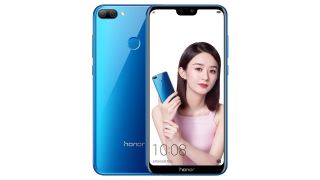 Honor has launched a new smartphone dubbed Honor 9N in India. The phone starts at Rs 11,999, which adds it to Honor’s crowded lineup of phones in the mid-range category. Not just the specs are similar, but the pricing of the Honor 9i, Honor 7X and Honor 9 Lite is quite identical.

The phone shares a striking resemblance with the Honor 9 Lite. The back panel especially, is similar to the Honor 9 Lite’s glossy finish and similar dual-camera design. The front has got a makeover, where the company has incorporated a notch on top of the display. The notch resides the ambient light sensor and a 16MP front camera that supports face-unlock.

The smartphone runs on Huawei’s homegrown chipset—Kirin 659 along with 3/4GB of RAM and internal storage. On the front, there’s a 5.84-inch display with full HD+ resolution and 19:9 aspect ratio.

Honor has achieved 79% screen to body ratio on this one, which makes it the only phone in the segment to have this feature. From the looks of it, it seems like the company is trying to build upon the Honor 9 Lite’s successful design with slight upgrade in the display department.

The back has a dual-camera with 13MP primary and 2MP secondary sensor. The camera comes with tons of modes and features like portrait, group selfie etc. It gets a 3000mAh battery to power up the internals.

It runs on Android Oreo with highly-customised EMUI skin on top. It also supports Huawei’s latest GPU Turbo tech, which is said to increase efficiency of graphic processing by 60% and reduce power consumption by 30%. Although it’s not available out of the box right now, the company will release it in the near future via an OTA update.