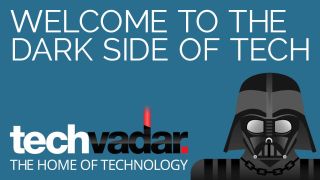 Welcome to the Dark Side

With millions waiting eagerly for the launch of the seventh Star Wars film, Star Wars: The Force Awakens, Future's tech sites will be rebranding themselves in celebration and asking: are you ready for the dark side or are you going to use the force for good?

T-3PO will be joining the rebel alliance, practising targeting womp rats and channeling Jedi master Yoda - as well as looking at the utopian side of technology.

But for us on techvadar, we're representing the evil Empire and will be taking a look at the dark side of technology, from rogue AI to military drones, to government snooping, VR dystopias and 3D-printed guns.

And, of course, we will be celebrating the amazing Star Wars world with a look at the technology through the films, the impact that Lucas' world has had on everything from sound to IMAX, and covering everything from VFX to the design of some of our favourite gadgets.

We'll be seeing exactly what it would take to build a Death Star, asking the specialists just how they would undertake such a project, whilst muttering "that's no moon..."

We'll also be trying to recreate a key moment in the Star Wars films with current technology, looking how far a real life C-3PO may be, and chatting to some of the biggest film buffs on the planet.

Star Wars "week" (It's actually a fortnight but we're going to keep saying it until you're convinced that these are not the droids you are looking for) starts right here - so come with us into an occasionally dystopian galaxy far, far away.

And whatever you do - don't turn to the light side

The 8 most entertaining Star Wars rip-offs

When innocent tech goes bad: 9 gadgets that went to the dark side

7 potential doomsday scenarios and the tech that makes them possible

11 Star Wars activities to fill time until the new film

10 ways the Star Wars prequels tried to ruin the originals

10 technologies that the evil Empire would definitely approve of

Before Episode VII: the behind-the-scenes story of the Star Wars Blu-ray

The 20 best Star Wars T-Shirts in the Galaxy

Yes, we can build a Death Star - and here's how

Technology is exactly as evil as humanity

The strange tale of Black Angel, Star Wars and lightsabers

How to build the ultimate gaming PC for Star Wars: Battlefront

Why we love Star Wars

Behind the magic: an inside look at Skywalker Sound

How to create your own Star Wars effects for free

Why has Star Wars turned its back on digital film?

10 fictional AIs that should make everyone scared for the future