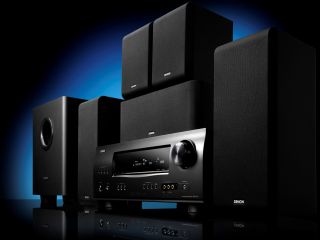 Denon gets geared up for 3D

Denon has a announced the arrival of its DHT-1311XP AV receiver system, offering 5-channel sound and has been optimised for 3D.

Packed to the rafters with audiovisual niceties, the 1311XP has four HDMI 1.4 inputs (the tech that gives the receiver a 3D slant) and one HDMI 1.4 output.

Also included in the setup is a 5.1 speaker system which includes two-way front and centre speakers, two full-range surround speakers and a 100W 8-inch subwoofer.

As well as being 3D capable, the receiver has iPod connections, including a dock, which will take the information from your iPod and display it on the dock's screen.

Audio-wise, the system is compatible with pretty much all the major audio formats including Dolby TrueHD and DTSHD Master Audio.