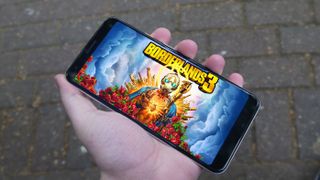 If you want to play Google Stadia on the go, currently you have to use a smartphone from the company itself like the Pixel 3 or Pixel 4, but it seems Google is getting near to expanding that net with more devices running the game streaming service.

That news comes from 9to5Mac, which has collated reports of various Stadia subscribers who don't use Pixel devices, who have opened the app on their smartphone (as you need to use the phone app to stream games to different screens) and found they're still able to play games.

Unless you're using a Pixel phone, the handset isn't typically an option, but these users were reportedly using devices like the OnePlus 6T, Samsung Galaxy S10e and Samsung Galaxy Note 9.

It seems, then, that Google is rolling out tests for subscribers on non-Pixel phones, to see how well the device can stream and play games.

Unfortunately for these users, the Stadia test only lasted the game session, so when they stopped playing they couldn't use the phones for gaming again. It seems the testers have been chosen at random, so if you're a Stadia fan don't hold your breath (but also, never say never!).

No issues were reported with the gameplay, so it seems the devices ran Stadia well – depending on what Google finds from its tests, we could see non-Pixel phones run Stadia very soon.