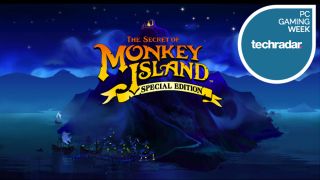 The name Threepwood will still be etched in the conscious of anyone who experienced the epic Amiga adventure game, The Secret of Monkey Island. Penned by Mark Ramshaw in 1991, here is Amiga Power's review to remind you of just why the game, and its lily-livered protagonist, combined to make one of the most memorable click-and-point adventures there has ever been.

The Secret of Monkey Island

Ah, Lucasfilm adventures. Never something I really got the hang of, or took a shine to, to be honest. I found their earlier efforts distinctly C640-like in style, with the mouse-controlled input system as much of a hindrance as a help. To cap it all, I found it hard to get out of my head the idea that using moving graphics in an adventure wasn't much more than a gimmick, doing little or nothing to help gameplay at all.

That was an easy enough line to take with the early efforts. By the time Loom came along, with its stronger plot, improved graphics and easier player interface, my position was starting to look a little tenuous, however. THe game may have been far too easy and a little ragged around the edges, but it was undeniably good. A quiet triumph for Lucasfilm, then – but nothing comapred to what they've come up with now.

With The Secret of Monkey Island, the mouse-controlled, graphic-adventure comes of age. This is a truly excellent adventure game, easily the best I've seen this year. It's hard to think where to start with describing it, so let's take the traditional route and begin with...the plot.

Unlike so many adventure games, Monkey Island doesn't simply use the scenario as an add-on, easily changeable backdrops to the game – hence hte pirates/treasure/ghosts/island atmosphere so permeates every aspect of the game it would be impossible to imagine it without them. It sets a new standard of mutual-dependence between location and game that others will find bloody tricky to follow.

The game opens with his arrival at Melee Island, the idea being to guide his stumbling steps towards true piratehood, and beyond. (Beyond Well yes – as things unfold, you'll discover that achieving the status of swashbuckler is only the beginning. There's much buckling of the swash and, erm, swashing out of the buckle to be done after that. This isn't Skull And Crossbones, that's for sure.)

One of the very best things about the game is the way a fairly sophisticated sense of humour is incorporated into the game. I know what you're thinking – humour and computer games go together like Prince Charles and Sam Fox – but think again. As much as it can be said that anything does, it's the humour that really makes Monkey Island.

It's intrinsic to everything. From the way just about every character in the game gets your name wrong ('Threepwood, my name's Guybrush THREEPWOOD!' you find him screaming for the zillionth time), to the patter of the used ship salesman (whose aim sees to jump about in time with his over-used mouth), who would rather give you his granny than lower his prices, it's packed with characters and situations to make you smile or simply burst out laughing.

I particularly loved some of the commands possible ('Talk to men of low moral fibre' becomes an option when you confront some pirates), and the way you can even hold what is probably an intelligent conversation with the dog.

Apparently, Fido actually gives the solution to the whole adventure anyway, but unless you know the doggy-lingo, you'll just have to fathom it yourself.

Then there's the...but no. I'm not going to give you any more examples of the humour, partly because it'll spoil the whole experience for you when (not if) you buy it, and partly because, like all great comedy moments, you really do have to be there.

So leaving atmosphere, plot and the like aside for a moment, how does it all work in a more mechanical sort of way. Well, for a start you have to take on board that none of this character control lark is done by typing.

Most of you will realise that already, of course, but just in case you've just tuned in to the Lucasfilm channel and aren't familiar with their thang, you may be pretty amazed to learn that the whole thing is done with the mouse, using a point-and-click interface. This means that at any point in time, the computer will display all possible options on-screen.