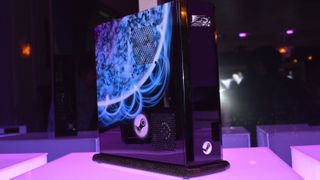 The big Xbox One sales numbers that Microsoft are crowing about have not got Valve too concerned as they launch a slew of Steam Machines on the world.

Three million Xbox sales are impressive, but Newell - speaking at CES 2014 - was quick to point out that Steam's user base is significantly bigger.

Of course, Newell's well aware that's not a fair comparison and the proof of the pudding is in the amount of Steam Machines that are sold, with 13 different varieties available from a host of third-party manufacturers.

The comment perhaps best indicates just where Steam Machines sit in the gaming world - potentially bridging the gap between the PS4, Xbox One and the still vibrant PC gaming universe.

The Steam Machine could, at least in theory, become a big player in main room, big television gaming and compete with Sony, Microsoft and Nintendo.

As the Linux-based OS slowly adds more PC games to its playability roster (currently only 300 of the 2,000 are compatible), Steam Machines become more and more viable - especially given that purchases on PC will also unlock the Steam Machine version.

"Part of why we think that this is the right direction to go in is that we can benefit from everything that people have already done," he added.

"If I buy a game on Steam and am running it on Windows, I can go to one of the Steam Machines and I already have the game. So the benefit as a developer, you benefit as a consumer, having that PC experience extended into the living room."