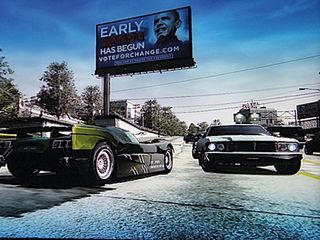 How long will it be before we'll be able to vote from inside our games?

As gamers we're easily hypnotised by swish. When a game engine manages to make the real world look rubbish in comparison to a 3D tree, our eyes well up like we're witnessing dawn's rays rising across the ziggurats of Machu Piccu.

Games have a long history of mimicking reality and making games that look and feel like realistic environments are key goals for many developers wanting to immerse the player in their worlds.

Ignore for a moment honest physics, expressive facial animation, even the vast, open world of GTA 4 and the GPU shredding graphics of Crysis, because one other area where reality has seeped into games is the wall-to-wall coating of real-world products and ads in games.

For over three decades game developers have combined forces with advertising agencies and commercial brands to create games that have incorporated a plethora of ads from billboards, movie ads and mascots to in-game products and brand-hyping posters to your local polygonal neighbourhood.

These in-game ads have made game environments as commercially important to big corporations peddling their 'shiny new thing' as real ads, and naturally gamers have taken notice of the growth.

With enough promotional material from Pepsi, McDonalds, AXE Deodorant, Adidas and T-mobile to fill out a prop quota for an American sitcom, in-game adverts (IGAs) have developed a reputation for shamelessly commercialising games.

But since their inception thirty years ago, IGAs have changed in tone and style alongside the games themselves, and modernised almost as dramatically as graphics have in that time. Which begs the question, are IGAs as much a commercial coup as they were decades ago?

Step back just a few years to 1979 and we see product placement at its earliest. There she was, Atari's Lunar Lander, wretchedly archaic to us now. It was a bleeping, blooping coin-op game to be played on a single, hulking arcade cabinet. And even though Atari had no specific relationship with advertisers during its development, these days it's widely considered the first game to incorporate a corporate brand.

In this case it used McDonalds as its reference of choice. The game provided an Easter egg that allowed your astronaut to leave his ship to buy a Big Mac at a hidden McDonalds when you land on just the right spot. Lunar Lander followed the classic arcade tradition that fine-tuned gameplay to create compulsive titles that hooked arcade players into repeat plays, and this genre became the very first platform for true in-game adverts, which were seen throughout the early 1980s.

Pepsi is funded by martians (maybe)

It is astounding to realise that the corporate world had started kneading its bejewelled knuckles into game design at a time when games were struggling to make objects look round let alone recognisable.

Pac-Man had just been released on the Atari 2600, and so had Sinistar; the games industry was still in its infancy at this point. But alongside the arcades was a new genre of game: the adver-game.

One of the earliest examples had come out of a partnership between Coca Cola and Atari, with both companies pooling their expertise to create the Space Invaders clone, Pepsi Invaders. In a stroke of marketing genius worthy of The Apprentice, the game replaced all invading aliens with the letters 'P', 'E', 'P', 'S' and 'I' and added a command ship in the form of a Pepsi logo, followed by the words 'Coke Wins'.

These words would flash repeatedly on the screen once you destroyed its commercial rivals, presumably to counteract the effects of the Pepsi Challenge Pepsi Invaders had been commissioned specifically for a 1983 sales convention and it was a hefty piece of marketing that had more to do with strategic advertisement than it did game development. But this was the nature of the adver-game: a genre wading in corporate imagery and built largely to sell breakfast cereal and bargainpriced soft drinks.