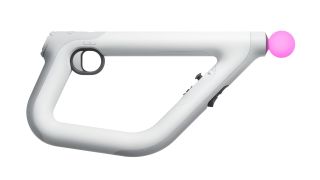 With PlayStation VR set to land in four months, it was no surprise that Sony went big on virtual reality at E3 2016.

Along with a handful of new VR-ready games, Sony revealed a new add-on called the PS VR Aim Controller, which you'll be able to use with the game Farpoint - and presumably plenty of other titles too.

This isn't just a piece of plastic to slot a Move Controller into - the peripheral comes with everything built in - making it a spiritual and more technologically advanced successor to Sony's Sharpshooter.

Farpoint's studio co-founder Seth Luisi said the Aim Controller is the "most realistic and precise way to control" the game, promising direct 1 to 1 tracking.

"This allows you to do things in Farpoint that just are not possible in a standard FPS game," he said. "It also provides an unbelievable sense of presence in the virtual world."

Previous PlayStation VR demos have either used a pair of PlayStation Move controllers or else a standard DualShock 4.

The question now is: when are we going to get our Time Crisis reboot? Because, let's be honest, that's what we're all waiting for.

Come on, Sony - there's even a job in there for your live E3 orchestra...