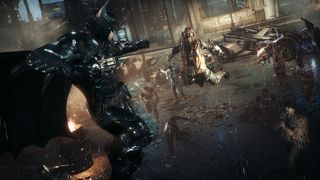 Here's something to be happy about if you're a PC gamer - while everyone else now has a couple of months of gaming wasteland to look forward to, we've still got Arkham Knight!

It's not much solace after one of the worst launches since Frontier: First Encounters launched without support for the SoundBlaster and Pool of Radiance: Ruins of Myth Draenor's uninstaller decided to take most of Windows out with it, but it's what I'm holding onto. Just think of all those poor suckers sitting bored on those long summer evenings, wishing they had a new Batman to play. Well, we will have. Once again, the PC comes through! Best gaming machine!

No, I'm not even convincing myself there. To call the PC launch shameful is to leave no word for crashing a funeral dressed as Whooping Cough the Happy Clown. From the outside, it's hard to know who to blame - Warner Brothers for publishing a game creakier than an old attic floor and/or skimping on the budget, Rocksteady for not being hands-on enough, porting house Iron Galaxy for failing so miserably, or any variation thereof.

It doesn't really matter though, there's enough shame to go around - and a bonus for whoever put a note about technical issues in the interface after an advert for the Season Pass.

Not everyone is having problems of course. Personally though, I have an i7 with 8GB of RAM and a GeForce 970, and the first time the Batmobile showed up, I may as well have been playing a Myst game. Better, of course, because a) Batman was in it and b) it wasn't actually Myst and thus wins any fight by default, but still hardly the triumphant release I was hoping for. It's shelved now, awaiting a patch Rocksteady has promised they're helping out with, to make it both perform properly and switch back on a whole lot of effects and quality settings that so far make the PC version the world's most expensive advert for the Playstation 4.

In the long run though, we might all benefit from this. It's hard to forget for instance that when Arkham Origins, the non-Rocksteady made prequel deemed 'yeah, s'alright, I guess' landed the other year, WB Games' response was the insulting "The team is currently working hard on the upcoming story DLC and there are currently no plans for releasing another patch to address the issues that have been reported on the forums." In short - we hear your complaints, but since you're not sending them with cash, lalalalalalalalalalalalalalala!

This time though, at least one thing is different. It might not be directly connected to this specific example, but Steam offering refunds has absolutely changed the overall game. Now, players don't merely have the possibility of getting their money back, but the guarantee. Officially there are restrictions, like not having played something for more than two hours, but even then there's wiggle-room.

Compare this to most game stores, which have historically refused outright to give refunds due to believing that everyone who tries that has simply taken the game home, made a copy, and then gone back into town (in fairness, not without some cause!), or online sites declaring all sales final to the point that GOG.COM announcing a refund policy for non-functioning games back in 2013 was considered news. Even then though, it only applied to games not working or bought by accident. "I don't like it" has never been considered a good excuse for PC titles.

To give companies some credit, it is harder to develop for the PC than for consoles - a moving target is always harder than a static one. To take it away though, the general attitude towards the PC has been pretty shameful of late, with companies like Ubisoft habitually releasing games late on it (though they're getting better) and game code not being released in time for reviews (The Witcher 3 for instance only appeared before launch in PS4 version. And while the argument was that this gave the team more time to tweak and balance, it was a shame to see what had historically been a PC franchise get its first outing elsewhere) and plenty of other issues.

Steam being by far the largest PC retailer at the moment though means that treating the PC as an afterthought is a critically bad idea. Games are now so expensive to make that short of taking a big cheque from Microsoft or Sony to actually create an exclusive for their platform (which almost never happens - even the likes of Rise of the Tomb Raider are just timed exclusives, whatever the marketing says), every platform counts. Most games don't make much money, they're only getting harder and more lost in a swelling marketplace, and even many successful developers are rarely more than one flop away from disaster.

Willingly sacrificing the might of the PC for console-shininess is increasingly commercial suicide, to say nothing of the fact that PC games have an endlessly longer tail than most console releases through events like Steam sales, bundles, re-release potential, and the likes of Kickstarter, provider of many console refugees like Shenmue, and Keiji Inafune's upcoming "Not MegaMan" and "Not MegaMan II (But Did I Mention I'm Totally The MegaMan Guy?)".

Arkham Knight's fate is hardly going to go unnoticed, and either way, we win. If the game is fixed to work properly, then great! However, it's also going to fall out of that all important marketing window when it would otherwise have had a clear run, as well as feeling like yesterday's game compared to other new releases like Fallout 4... or depending on how long it takes to fix, perhaps even Fallout 5.

It's not simply that people won't be buying it because of the reports - the game has been taken off the Steam marketplace entirely, as well as pulled from other stores like Game. This is a lot of money jangling away down the toilet every day.

If it's not fixed? Then we don't win as heavily, but the point is made - in a rare case of players voting with their wallets/refund buttons actually having a direct impact, releasing a game in this state suddenly becomes a much bigger risk. Case in point, Ubisoft's Assassin's Creed Unity last year. Take that kind of release, add a refund button that's not going anywhere any time soon, and a half-arsed port suddenly becomes less a cold business decision than a game of Russian Roulette played with an AK-47.

And the third option, that all this is a Pyrrhic victory at most, encouraging developers not to worry about the PC at all? Honestly, it's not that big of a call. Unless you're Bungie or a first-person developer or have given up all hope of actually selling games by developing for the Nintendo Wii U, you just don't have a choice. The era of the PC as a machine that could be sniffed at and dismissed and ignored is long, long gone, and either shunning or half-assing it is as self-defeating as declaring you won't sell to players with blonde hair.

So, really, this could be for the best - Arkham Knight as the first big test-case for the new era of PC gaming, when rebelling against broken ports is as easy as clicking a button and deciding what to spend the money on. It's been a long time coming, and many in the industry are scared of it, but that's not necessarily a problem. Change is scary, but the companies that do right by gamers should still find gamers doing right by them.

Even after the patch though, expect the Batmobile sections to be rubbish.