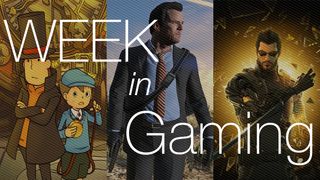 It's times like this that I sort of wish the human race could hibernate. Think about it: we'd go to sleep after New Year's, then sleep through until Easter, at which point we'd wake up, rapidly elevate our blood sugar with chocolate eggs, and then enjoy the spring sun while wearing bikinis and sunglasses. Probably.

And then we wouldn't have to wait SO LONG for E3 2015 to happen. The couple of months in the run-up to E3 are some of the most frustrating in the whole gaming calendar, because all the studios are being more secretive than a spy playing poker in Area 51. Every now and again they'll tease us with the gaming equivalent of a coy flash of ankle at a Victorian soiree - like CoD Blops 3's teaser campaign, which I'm mostly finding incredibly confusing.

It's something to do with grainy, vague Snapchats that are apparently filled with subtle Call of Duty references like guns and bullets and blood and big beef-men with the voice of a 13-year-old boy questioning the purity of each other's mothers. Somehow, this translates to "OMG Call of Duty Black Ops 3 is probably coming out," to which I say, cool. As long as I can continue calling it Blops, that's fine by me.

What else is being teased? Why, the next Deus Ex game, of course. We saw a few screenshots earlier in the year which were totally, completely obviously Deus Ex, but Eidos just shyly flashed an ankle or two and said "oh, no, it's just to demonstrate our new engine. Teehee!" Nice try, Eidos. If you enjoy Deus Ex, you'll be happy to know that the new trailer is packed with super-obvious messianic imagery and lots and lots of yellow, and lovely Adam Jensen - who is now more robot than human - is still wearing his nice sunglasses and looking grumpy with the world. Essentially - it's looking Deus-sexy. Nice.

What's going on chez Nintendo, then? Quite a lot, since last week's Direct - and not all of it is good. Sad face. Puzzle-solving logic-dude Professor Layton's next outing is on mobile, which means it could be okay - like its mobile predecessor, Mystery Room - or it could be a rubbish, free-to-play, match-three nightmare. The sequel to last year's gorgeous job-hopping RPG Fantasy Life is also on mobile, and early screenshots are making it look a bit too Farmville for my liking.

Story of Seasons - the unofficial Harvest Moon game made by the core team from the original developers Natsume - is now out in America, but not the UK yet. It looks brilliant, and an awful lot better than the Minecraft-inspired official game, Harvest Moon: The Lost Valley. If you fancy a bit of calming pastoral foraging, and slowly building relationships with pixelated hotties, then Story of Seasons is the game for you. If you like crappy Minecraft wannabes with bad anime eyes and characters that all look like children, then go for Lost Valley. Don't say I didn't warn you.

(Oh, and speaking of harvesting stuff...)

Let's wrap up with something nice, shall we? GTA V is coming to PC. Soon. FINALLY. It looks nice and all that, but I'm mostly excited about MODS. Imagine the possibilities: Two-Headed Trevor, flying cars, trucks that turn into dragons, guns that shoot jellyfish. The possibilities are endless. I assume. I don't know how to mod stuff. Check out our preview for all the gossipy information, like whether or not it's possible to load jellyfish into revolvers. Actually, that might not be in there, but you'll just have to read the whole thing to check, won't you?

That's all for this week! Well, actually, it's not. There was more I wanted to talk about, but I just woke up from a three-month hibernation nap and now I'm sleepy.