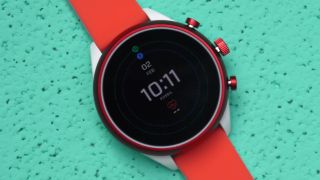 It sometimes seems almost like Fossil and its various sub-brands are single-handedly keeping Wear OS alive, and that trend doesn’t look set to change, as it appears that five new smartwatches from the company are in the works.

Several FCC (Federal Communications Commission) filings for Wear OS watches with the model numbers DW10F1, DW10M1, DW10M2, DW10E1, and DW10D1 were spotted by Droid Life, and while the listings don’t reveal much, those model numbers do hint at which brands they belong to.

Based on previous Fossil watches, it’s likely that the final letter in each name is the first letter of the brand it’s part of, so DW10F1 would be a Fossil watch, DW10M1 and DW10M2 would be Michael Kors ones, DW10E1 would be Emporio Armani, and DW10D1 would be Diesel.

Other than that, and the fact that these are Wear OS watches, all the listings really reveal is the unsurprising presence of Bluetooth and 2.4GHz Wi-Fi.

We don’t know when these smartwatches might launch, but their presence on the FCC’s database suggests they could land soon.

We also don’t know what specs or features they might have. Hopefully they will at least use the Snapdragon Wear 3100 chipset, rather than the older Snapdragon Wear 2100 that most Wear OS watches still use.

Regardless, they’ll probably all have similar specs based on Fossil’s past releases. Typically the company releases a bunch of similar models under its different brands, with just the design and wallpapers differing. With any luck we’ll know for sure soon.