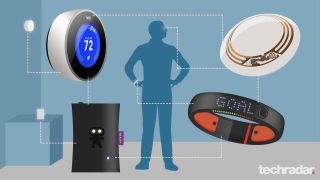 Smart home to get safer

OfCom just published a paper on how it's going to deal with the internet of things, the rather vague term that waves a hand in the direction of all the electronics that are suddenly getting smart.

While the paper doesn't make any bold claims or plans, it does say OfCom will look into the security of the infrastructure required to get this whole internet of things off the ground.

As smart devices start taking over parts of our lives that were previously mechanical, the potential for hacking becomes all the more horror film-like.

Smart locks that spring open at an intruder's command? Smart home security systems that could be used to spy on, instead of protect, you? There's clearly some work to be done here to avoid a future disaster.

The paper explains that OfCom sees IPv6 as a big part of this connected future.This is a new internet protocol much more advanced than the IPv4 one our digital world is currently based on.

It allows for an order of magnitude more IP addresses to coexist, meaning that there would be less need for IP sharing.

With the connected home becoming a reality right now, and the IoT expected to be an $8.9 trillion market by 2020, these sorts of changes are needed sooner rather than later.