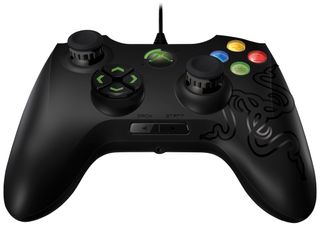 Peripherals giant Razer has announced that the controversial Onza – which offers mappable multi function buttons, Hyperresponse buttons and PC compatibility – along with a 15 foot cable, because we all know that wired is for the 1337.

The Razer Onza Tournament Edition will cost a not inconsiderable £45, with the Standard edition around £35. Both are available for pre-order on January 17.

"We predict mass hysteria in-stores, people will fight over fast-selling stock. Blood might be spilled," over-enthused Robert "RazerGuy" Krakoff, president Razer USA, not a man scared of a bit of hyperbole.

"So I recommend pre-ordering for minimal stress and safety issues. With the Razer Onza controllers, we are excited to bring the attention to detail and precision we give our PC gaming peripherals to the Xbox 360."

The press release lays out why the controller is likely to prove popular, although the controversy around the fine line between macro cheating and good kit giving people the edge is unlikely to be blunted.

"Twist the analog sticks in one direction to make them more resistant for steadier control, or twist in the opposite direction for quicker, fluid movements. Boom! He's dead. Boom! She's dead. You're just too fast; nothing's stopping you when you have an Onza in your hands."

Cheating or not, we reckon it can only help us negotiate that tricky Burnley versus Real Madrid Fifa 10 Champions League final match before polishing off the n00bs on the Black Ops server.