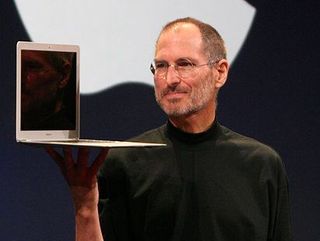 Apple's Steve Jobs is officially the 'person of the decade' – at least, he is according to the readers of esteemed US newspaper the Wall Street Journal.

Journal readers voted for Jobs one as their man of the Noughties following the Apple CEO's return to work after some time away for medical treatment.

WSJ notes that Jobs increased the company's stock by an amazing 700 per cent in value after returning to the the helm earlier this year.

Jobs picked up 30 per cent of the vote for changing "the way people buy and listen to music," with the iPod and iTunes.

By comparison Jobs' arch-rival and software nemesis, Microsoft's Bill Gates, only managed to garner a mere nine per cent of the votes.

Investor Warren Buffett got 17 per cent of the vote, while Google's founders, Sergey Brin and Larry Page, got 12 per cent in the poll.