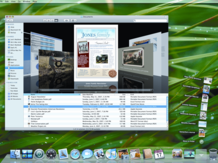 Leopard will be superceded by OS X 10.6 'Snow Leopard'

In the first moments of his keynote Steve Jobs made official the rumours of a tweaked version of OS X – called Snow Leopard. The clue is almost certainly in the name – the new iteration will be a tweak of Leopard rather than an all-new release.

However, it’s not known whether the new version will support the older PowerPC architecture or even if it will support Blu-ray.

However the non-PowerPC rumour has been harpooned on several Mac fan sites – primarily because several sites have cited that drivers are in development for the older platform. More likely is that PowerPC support would be phased out with OS X 11.

Version 10.6 will be a tweak primarily with security and speed in mind. “Rather than focusing primarily on new features, Snow Leopard will enhance the performance of OS X, set a new standard for quality and lay the foundation for future OS X innovation,” says Apple in its information about the release.

The new OS will be a 64-bit operating system but, again, we don’t yet know whether 32 bit support will be dropped. 10.6 will also make it possible for applications to make use of graphics processing power - currently a big talking point in the industry.

“In our continued effort to deliver the best user experience, we hit the pause button on new features to focus on perfecting the world’s most advanced operating system.”

Even if it does support PowerPC, OS X 10.6 could drop support for the G4 processor – it’s already at the very bottom end of Leopard’s specs. Apple says 10.6 is “is scheduled to ship in about a year.”