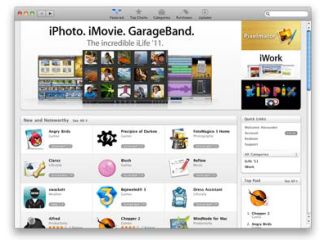 Apple has just released an upgrade to OS X that brings with it the long-awaited Mac App Store.

The new desktop App Store gives Mac users access to over 1,000 apps which can be purchased or downloaded for free.

After installing the OS X 10.6.6 update, users will see an App Store icon appear in the dock, which is also where newly downloaded apps will materialise.

The App Store should feel very familiar to anyone who has used the iPhone, iPod touch or iPad stores to purchase apps, with contact details and payment information handled by users' iTunes accounts.

The new software will prove better for app discovery than iTunes, a bugbear that iOS users have had since the launch of the iPhone.

A range of apps are available from day one, including several Apple-made apps such as iLife and Aperture 3. Notably absent are apps from Microsoft and Adobe.

Stay tuned for a hands-on with the new Mac App Store later today.