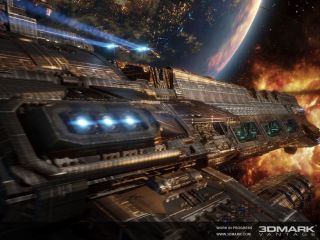 New Calico is the obligatory 3DMark space odyssey, but this time on a much grander scale

Spool up your graphics card, prime that processor for action and prepare to download some dodgy video drivers. Futuremark has released an all new version of its popular, though some might say pointless, 3D performance benchmark.

3DMark Vantage is claimed to be a gruelling but revealing test of graphics and overall system performance with a particular emphasis on support for the DirectX 10 multimedia API. If it's anything like previous versions of 3DMark, Vantage will no doubt have ATI and Nvidia scrabbling to release graphics drivers that push the limits for both performance and fair play.

Only systems with full software and hardware support for DirectX 10 can run 3DMark Vantage, period. That means it's a Windows Vista-only benchmark tool. In fact, Futuremark has gone one further by requiring software support for the latest 10.1 mini-revision of DirectX, in turn requiring the SP1 patch to be applied to Vista.

The only other absolute hardware requirement is a CPU that jives with the SSE2 instruction. But that includes every PC processor currently on the market.

Unlike 3DMark 2006 which was a mild rehash of previous versions, Vantage is claimed to be based on an all new 3D engine. The better for taking full advantage of the capabilities of DX10, in other words. The test itself is split into two halves. One focuses on graphics or 'GPU' performance, the other on CPU oomph.

The graphics benchmark consists of two standalone tests. The first, called Jane Nash, involves a large subterranean lair and a female protagonist getting up to the usual action-gaming larks. It's a scene packed to bursting with shaders, dynamic lighting, cascaded shadow maps and various hierarchical rendering techniques including water refraction and reflection. It also sports GPU-based physics processing in the form of cloth simulation.

Graphics test two is New Calico. It's the obligatory 3DMark space odyssey, but this time on a much grander scale. With a huge planet providing the backdrop and a fleet of mean galaxy-shrinking machines, this benchmark is heavy on shadow mapping and instanced objects – think space debris. Local and global ray-tracing effects such as parallax occlusion mapping and volumetric fog also make an appearance.

It all sounds awfully impressive. But does it actually reflect the techniques both current and possible future game engines use? In a very broad sense, yes. These are certainly the sorts of visual effects that are increasingly found in games you can actually play.

But without digging into the very shader routines Futuremark's code monkeys have created, we cannot really comment on the specifics. Certainly in the past there has been controversy about the somewhat quirky details of the code found in Futuremark's benchmark engines.

We're also not enormously impressed by 3DMark Vantage purely as a spectacle. For a benchmark that is supposed to give a glimpse of future rendering technology, the graphics on offer are pretty ordinary. Existing games like Crysis pack much more visual punch.

The second has the planes negotiating an assault course designed to promote lots of collisions. It's a physics test first and foremost and is capable of leveraging hardware physics processing hardware such as Ageia's PhysX card, if present. Futuremark reckons both tests deliver better support for multi-core CPUs.

As for how the all important overall score is arrived at, the details are rather arbitrary. But it is worth noting that the general bias of the results is weighted towards the graphics side of benchmark.