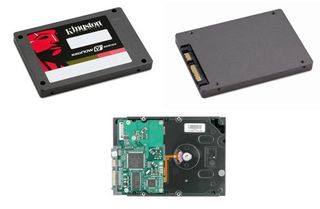 Cheap SSDs for the masses from Kingston

Kingston Digital has announced a sub £90 solid state drive (SSD) that it is hoping will significantly speed up people's loading times.

The speed of SSDs makes them an attractive proposition for those people who want to get to their desktop faster or boot applications more quickly, but the hefty price for Flash memory has made this an expensive luxury.

However, Kingston Digital's SSDNow V series 30GBboot drive comes in at less than £90, and to enourage people to try the product, the company is offering a bundle with cloning software, 2.5 inch to 3.5 inch brackets SATA data and power cable extenders.

Doing this should speed up your system significantly, with Kingston claiming that the improvement should be clear.

"In real-world numbers this means that by upgrading with an SSDNow 30GB drive, you can speed up open and close times of web browsers such as Internet Explorer or Firefox, and programs like iTunes or Photoshop by almost 6 times over existing regular desktops hard-disk drives". said Jim Selby, Senior Product Marketing Manager Kingston Technology.

When Google's Chrome OS surfaces it will only run on SSD devices, with Google wanting to focus on speed of getting to the internet and favouring the non-HDD option.

There's a nice video on the Remember Kingston website showing the difference between HDD and SSD.

The company has also released new RAM for Intel Core i7 and Core i5 computers.

"Users of the Intel Core i7 and X58 platforms can now take their systems to the memory extreme with Kingston's 1600MHz 24GB HyperX kit made up of six 4GB modules," says Kingston's release.