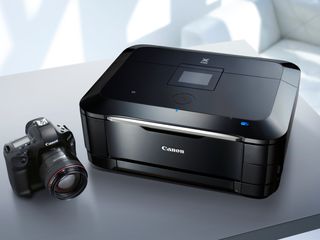 New Canon Pixma printers - in the printer world, this is a supermodel

Canon has announced a veritable slew of new printers and scanners, including the new Pixma range, two CanoScan and the Selphy Cp800 photo printer.

Canon has a well-established brand in the printer world and the latest Pixmar range brings 'some of the most dynamic models in the market' according to the company.

"With the new Intelligent Touch System, Full HD Movie Print Function and direct Flickr access from Easy-PhotoPrint EX software all enabling you to increase your creativity, anything is possible. The new PIXMA range does it all in unrivalled style."

The flagship printers are the new Pixma MG8150 and the Pixma MG6150 – two All-In-Ones that Canon thinks look good and are easy to use.

"Boasting a sleek, deep black exterior that adds style to any space, both models come to life when switched on, instantly illuminating the TFT display and a large central control panel that guides users through a simple, step-by-step interface using Canon's intuitive new Intelligent Touch System.

The entire range features wireless connectivity, and on selected models, including the entry-level PIXMA MP495, wireless printing allows users to print from a range of Wi-Fi compatible devices instead of just being limited to PC printing.

"As well as their home computer or laptop, the new PIXMA range also allows users to print directly from a number of devices, including iPhone, Android devices or the PlayStation 3," adds Canon.

As you may guess, the CP800 replaced the CP780 and features a simple user interface and 2.5 inch LCD screen.

It has a UK release date of September and is priced at £99.