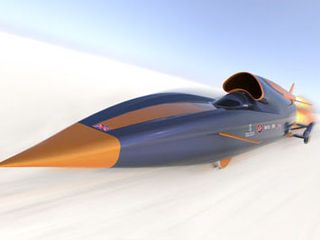 Bloodhound - can't you tell by the ears?

A car that could go as fast as 1,000mph is being designed and built by current land-speed record holders Richard Noble and Andy Green.

London's Science Museum will today see the unveiling of a scale model of the Bloodhound SSC, which it is hoped will smash the current land speed record of 766mph.

That record was set by RAF pilot Green driving a car designed by Noble in their ThrustSSC – which became the first car to break the sound barrier.

"We have held the world land speed record for the last 25 years and we still hold it. There is early competition developing and we have to defend our record," said Noble.

The launch is being used as a tool to inspire more of Britain's children to become engineers.

The UK has a huge reputation for its engineering, but amounts of people moving into the profession have been declining steadily and it is hoped that a project of this magnitude will persuade more kids to get involved.