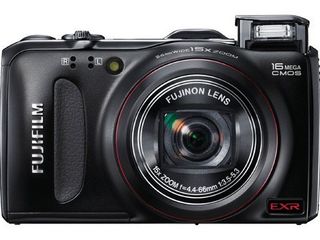 Fujifilm has launched a total of 16 new cameras at CES in Las Vegas this week, including one new GPS-equipped model to let you geo-tag your snaps.

The Fujifilm FinePix F550 EXR is not the first digital camera to pack in GPS tech, but it is one of the first affordable models from a major consumer brand.

Once you take your pictures the Fujifilm F550 will record the location data associated with them, which means you can place the snaps on a digital map – so if you are particularly forgetful then all you need to do is take pictures of where you've been and you'll never lose your way ever again.

The F550 has a 15x optical zoom lens with a 24mm wide angle, equivalent to a 35mm camera. It can take raw files as well as jpegs and shoot at up to 8 frames per second, at full resolution.

If you are not so bothered about the GPS features then you might want to plump for the F500EXR, which is a fairly reasonable £280 and comes in five colours.

However, if you want the (black-only) F550, then you will have to pay a little more, as that is going to cost £330 when it arrives in stores this coming March.