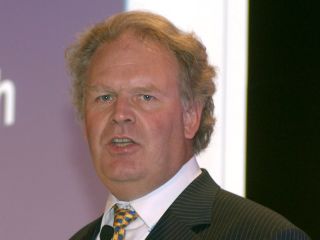 Frank Simonis, of Dutch home ents firm Philips, is the chairman of the BDA. He says it's now only a matter of time before Blu-ray becomes the established industry HD optical standard

At the end of last week, Warner Bros dropped a bombshell by announcing that it would turn its back on Toshiba's HD DVD optical disc format. That decision is the talk of the town in Las Vegas at the moment, with many CES-attendees predicting the rapid demise of the HD DVD format.

Frank Simonis, chairman of the Blu-ray Disc Association, told us today that Toshiba may be very close to abandoning ship and leaving the HD DVD format to rot in the past.

"Here at CES you've seen that the HD DVD camp didn't know how to respond to that message from Warner. They withdrew their press conference and in principle that means they are very close to throwing the towel into the ring. Because who would invest in a format that has limited support?

"Toshiba is in a very difficult situation and there's a very difficult decision they have to make. Do they immediately stop? Do they fade it out? Are they going to offer another type of product?"

We were due to speak with Toshiba's HD DVD ambassador Olivier Van Wynendaele at CES this week. But when the HD DVD Promotion Group went all quiet on us last week, it was obvious something was up.

Simonis says Warner chose to abandon the HD DVD format because it recognised that Blu-ray was inevitably going to win the format war.

"Warner did a real market analysis and sales on movies like 300 [which is available on both formats] shows that the potential of Blu-ray is much bigger than on HD DVD. The other point to make about HD DVD is that a format that's being pushed only by one hardware company is never going to make a world standard. Go round CES on the booths and see how many brands show a multiple of BD products and I believe that's what the consumer is looking for - a choice."

'You have to push it on all limits'

"Toshiba decided to base their format on DVD with blue laser technology," continued Simonis. "But when the Blu-ray group was founded we decided that this might be the last optical format and so we had to do it properly. We learned from the steps of CD going to DVD that you have to push it on all limits.

"The disbelievers said it was impossible to make it on a large scale - but right now the disbelievers are gone because the technology is there. Replication is running at high gear. Products can be produced on volume. Six million PS3s shows that it is possible, so those things are gone.

"And that takes away most of the arguments of the HD DVD camp that their product, which was based on a simple-to-produce concept, was better."

But despite the strong position that Blu-ray now stands in as a format, Simonis refused to claim victory.

"We still don't believe this situation is yet resolved. We need to finish the work and do a proper job, so yes we could declare victory but that's wrong. The victory is only there when the consumer totally wins, when all the content is available on Blu-ray. We're not there yet."