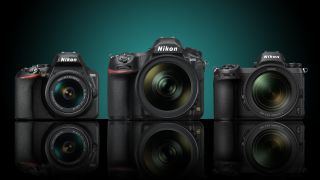 Camera heavyweight Nikon changed tack in recent years, choosing to focus more on its enthusiast and professional offerings and a little less on the novice side of the market.

Because of this, its previous 1 system of mirrorless cameras has now been discontinued and its compact line has shrunk to a fraction of its former size. It still very much has a number of solutions for beginners and those with a little more shooting time under their belt, but it's the prospect of one day using one of its more advanced models that entices many.

The most advanced examples include a healthy assortment of full-frame DSLRs and its most recent Z6 and Z7 full-frame mirrorless cameras, both of which also sport full-frame sensors. Below this level are high-performing APS-C-based DSLRs that arrives at various price points, with just a scattering of entry-level DSLRs and more junior-level compacts in the remainder of its portfolio. Here's what stands out the most.

Nikon’s previous 1 system never really made much of a mark on the mirrorless landscape, but its newer full-frame Z system has got off to a sterling start with the Z6 and Z7 (see below).

We reckon the Z6 is hard to beat for the price, offering a great blend of features and performance that should keep both pros and enthusiasts happy. The 24.5MP full-frame sensor is capable of delivering excellent results, while the 273-point AF system (while not quite as sophisticated as the 693-point AF in the Sony A7 III) and 12fps burst shooting should mean you'll never miss another shot. Handling is polished too, while the large and bright electronic viewfinder is a joy to use. Excellent.

Much like the company’s D850 DSLR (below), the Z7's ace card is that it manages to blend a high-resolution sensor with fast burst shooting and a fleshed-out 4K video recording option, making it versatile enough to be used for all kinds of applications.

Key advantages over its D850 cousin include 493 phase-detect AF points that stretch right across 90% of the vertical and horizontal axes, together with 5-axis Vibration Reduction that can be used with all kinds of lenses. As we found in our review, handling is great and the 3.69-million dot viewfinder is a joy to use, while video quality is also very strong.

Only a few native lenses have been developed so far, although you can use F-mount optics through an adapter, and while some may be put off by the presence of a single XQD card slot, this shouldn’t realistically be a deal-breaker when you consider just how much Nikon has managed to get right here.

Still the choice of many pros

Still arguably Nikon’s most desirable DSLR, the D850 is a robust, full-frame powerhouse that has proved to be smash among wedding, landscape, portrait and wildlife photographers among others.

Its key highlights of a 45.7MP back-illuminated full-frame sensor, 7fps burst shooting, a 153-point AF system and 4K video recording are supported by a solid secondary set of specs, from the 1,840-shot battery life and dual cards slots (one being the speedy XQD type) right down to illuminated controls for the benefit of those working in darker conditions.

Clunky SnapBridge functionality and slow live view autofocus speeds mean that it’s not quite a flawless performer, and it’s now somewhat overshadowed by the newer and flashier Z7 mirrorless camera, but for those after something a little more traditional the D850 remains a stellar option.

A great entry into the world of photography

The company’s most junior DSLR blends a capable imaging core with a light body and a fuss-free interface, and delivers it all with modest price tag. While we don’t expect many extras at this level, we’re lucky enough to get a handful, including a 1,550-shot battery life that is significantly better than every other camera in its class.

Compatibility with decades' worth of F-mount lenses and a 24.2MP sensor that loses its anti-aliasing filter to better capture fine details sweeten the deal further, although the lack of built-in sensor cleaning is a shame. The fact that there's no touchscreen may also displease those used to jabbing away at their phones and tablets, although on such an affordable model, it’s easy to understand Nikon’s decision to go without this.

With its 51-point AF system and video recording topping out at Full HD quality, the D750 may be looking a little dated next to some of its newer rivals. That said, it was always intended as a more compact, lighter and more affordable full-frame solution to the likes of the D800 series, and if you’re not fussed about 4K video there’s much to love.

The sensor delivers great dynamic range and noise control, while the AF system delivers a wonderful performance against static and moving subjects alike, continuing to work well when lighting conditions worsen. The viewfinder is nice and large while the 3.2in LCD screen tilts to help you shoot from all kinds of positions, and while the body is smaller than other full-frame cameras, this has no adverse effect on handling.

Supported by a respectable 6.5fps burst mode, two card slots, Wi-Fi and excellent in-camera Raw processing, the D750 would serve well as a primary body, but is also a logical choice as a backup to a camera like the D850 or Z7.

High on features, low on price

While Nikon’s D500 may appear to have a few advantages over the D7500 on paper, the fact that this newer model borrows many key features from its sibling and costs significantly less makes it a better proposition overall.

Crafted with the sports, action and general outdoors shooter in mind, the D7500 uses the same 20.9MP DX-format sensor as the D500, and also pinches its 180k-pixel metering sensor, with 8fps burst shooting, 4K video and a robust, weather-sealed body as further highlights.

The focusing system isn’t quite as advanced as the 153-point systems seen in other Nikon models, but we still found it to be a commendable performer in our review, while images also impressed. Some may prefer an additional card slot as the body has only been designed with one of these, but this is very much a nicety rather than an essential feature.

The grand master in Nikon’s current DSLR lineup, the D5 is pretty much as good as it gets with regards to speed and response for the action-shooting photographer.

It trounces its Canon EOS-1D X Mark II rival for battery life and autofocus points, and it boasts a higher-resolution LCD screen too, all inside a lighter body that has a 20.8MP full-frame sensor at its heart. While some fine-tweaks to its 4K video functionality would be welcome, the sports and action photographer benefits from excellent autofocus tracking, low image noise levels at higher sensitivities and a body that appears to be able to withstand whatever abuse you want to throw its way.

Competition from the likes of the Sony A9 means it’s not necessarily the only model you should consider at this level, but it’s definitely one for the shortlist if speed is more important to you than outright resolution.

This old timer has stuck around for good reason

Nikon’s D5300 recently blew out the candles on its fifth birthday cake, which is quite an age for a DSLR of any level, let alone one in a fast-moving category like the entry-level DSLR. But, despite being updated by the D5500 and subsequent D5600, it makes the list because it’s still a highly credible option for those getting into photography, with a feature-set that rivals newer models at the same price point.

While it may not benefit from the very latest sensor technology, the lack of an anti-aliasing filter in front of the 24MP APS-C sensor found here means that it records masses of fine details, while the 39-point AF system is more comprehensive than we would expect. The 3.2in vari-angle LCD is also larger than the entry-level norm too, flipping all the way around the face the front for easier selfies and group shots.

The presence of both Wi-Fi and GPS makes it a logical choice for the travelling photographer, although the lack of a touchscreen is a notable disadvantage in an age where the feature is now expected as standard. Still, as we found in our review, it delivers where it matters the most, with reassuringly good image quality.

We had mixed feelings about Nikon’s recent P1000 superzoom camera, with its monstrous 125x optical zoom presenting just about as many challenges as advantages. So it’s the more affordable and considerably smaller P900 that probably deserves consideration if high-zoom photography is your thing.

With a slightly more sensible 83x optical zoom range providing a focal range equivalent to 24-2000mm in 35mm terms, the camera is easier to work with at its telephoto extremes, with effective Dual Detect VR on hand to stabilise compositions and an autofocus system to works well in bright light.

The lack of a touchscreen does show its age somewhat, although this was also omitted from the P1000 and it's arguably less of a priority on a camera likely of this sort. It’s a shame there’s no Raw capture too, but full manual control over exposure does at least give you the flexibility to get it right in camera for ready-to-use results.

Dive deep with this sturdy compact

Nikon’s flagship waterproof compact manages to partner its well-rounded spec sheet with a design that’s thankfully a lot more sober that what we normally find in this category of camera.

Built around a 16MP back-illuminated sensor and 24-120mm (equivalent) lens, its rugged credentials include 30m/100ft waterproofing and 2.4m/7.9ft shock-proofing, with a GPS system, compass and an altimeter alongside.

The further bonus of 4K video capture also means that it competes well with models like the Olympus Tough TG-5 and Panasonic FT7, although we would have loved to see it pack Raw shooting so allow users to hone their masterpieces later on.