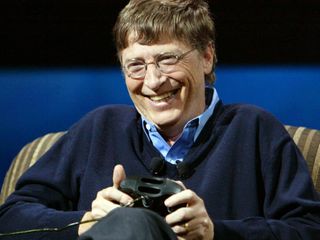 Gates on the Beeb

Bill Gates believes that the success of the company's applications like Word and Excel was created by the failure of competitors to develop similar programs quickly enough for Windows.

The departing Microsoft head, in an interview for BBC's Money programme – broadcast on 20 June – admits that the company thought it had all the answers because of the standout success of its suite of software programs and Windows, but that the impact of the internet on business "wasn't their expertise".

"We had made this huge bet on our graphics interface, and Windows 95 had vindicated that bet," said Gates.

"We tried to get everyone who did production soft to come along and support Windows but they were quite slow on it. So our own applications like Word and Excel were doing incredibly well; we had immense success and credibility at the time and the idea that we could seize new thing when it wasn't obvious to people outside of Microsoft.

"It was a very exciting time. I remember how enthused people were. We though we knew all the answers, and we did not a lot about the software but how it would affect different types of businesses of course that wasn't our expertise."

The internet was a huge milestone for Microsoft, and although the company has been accused of not fully embracing the burgeoning web early enough, Gates insists that the company was quick to respond.

"We thought 'wow this is a very big thing,' and so that kicked off a period of about a year of saying let's make sure our software work is focused on this," adds Gates.

"But the timing was kind of perfect because we were finishing a major version of Windows, Windows 95, which drove Windows totally into the mainstream.

"So as we got that completed we had all the talented people saying 'what's the next big thing to do?'. Internet software including the browser and the server became that new focus, and so it was pretty timely for us and it really drove computer sales."