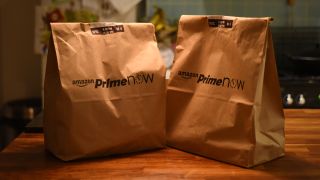 It looks like Amazon could very well be planning to revolutionize the apparel industry if a recent patent that’s been granted and reported by Recode is anything to go by.

The patent, which Amazon applied for in 2015 and was granted by the US Patent Office earlier this week, depicts an apparel manufacturing system that would quickly produce items of clothing only after a customer has placed an order.

Most online and physical clothing stores operate by manufacturing their clothes in a variety of sizes and colors in advance, selling the stock, and then re-ordering should they require more.

With this system, Amazon customers could potentially go online, select a clothing style, color and size after which Amazon’s computerized system would be able to create the item of clothing from start-to-finish all in one place and then ship it straight to the customer.

The computerized system that Amazon has drawn up would be comprised of everything that’s required to manufacture a standard item of clothing with textile printers, cutters, an assembly line and more resources besides.

It would also have cameras that would be able to monitor the clothing as it’s produced and make sure nothing goes wrong. If anything did go wrong, such as a fabric misprint or incorrect cut, the cameras should feed the error back to the system which would then adjust itself, alert an attendant or discard the item completely.

After production the products would be quality checked, packed and shipped.

To meet the large number of orders that would be made on time Amazon has designed the prospective system to manufacture items in batches based on customer location, sizes, and fabric types.

The patent reads “By aggregating orders from various geographic locations and coordinating apparel assembly processes on a large scale, the embodiments provide new ways to increase efficiency in apparel manufacturing.”

The patent also notes that this system could be used to produce things other than standard pieces of clothing such as footwear and home items such as bedding and curtains using a wide variety of materials.

Amazon isn’t exactly new to the apparel industry – the company has a huge selection of clothing on offer and it even has its own clothing brands which include lines for men, women and children.

As this system is just a patent it’s not clear when or even if such a system and facility will ever be created.

The patent also doesn’t say whether or not the system would be used to fulfill wholesale orders to businesses or orders made by individual customers. However if it was used for individual customers orders it could completely change the clothing industry and make fast fashion even faster.

With such a system, Amazon would be more than capable of responding quickly to trend changes without the worry of being left with large amounts of inventory that would only shift in sales.