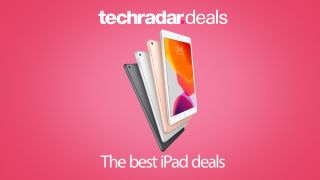 So you're trying to track down some cheap iPad deals and the lowest prices? We can certainly help you out there. After all, it's not the easiest of tasks there is considering Apple's products have a tendency to be priced on the 'premium' end of the scale. On the other hand, this is one of the best times of year to be on the lookout for the lowest prices in the iPad sales events.

When new versions of iPads come out on an almost annual basis, there's plenty of room for discounts on the older models. Not that we can't find you top discounts on the iPad prices for current-gen models too including the brand new 2019 incarnations of the all-new 10.2-inch iPad, the iPad Mini, and iPad Air. We've got you covered for the high-end iPad Pro deals too although it's a shame Apple didn't release an updated version in 2019.

Finding iPad deals is slightly easier if you know where look. And with small-time manufacturers always keen to steal away customers with budget tablet options on the cheap end of the scale and big-time rivals Samsung and Microsoft trying to muscle into the iPad Pro's territory, Apple isn't as averse to discounting its models as it used to be.

We've seen chunky discounts on everything from the entry-level iPad with Apple Pencil support to the incredibly powerful brand new iPad Pros. The older iPad Air and iPad Mini models are way cheaper than they used to be too, especially with newer version recently landing on shelves. We've compared prices below for every model still widely available. If you're a big fan of the Apple brand and operating system, we've got you covered for the latest cheap MacBook deals too.

Now with a larger screen for the same price

If you've been thinking of getting a new iPad for a while this is a great place to start, although it's only a minor upgrade over last year's, so bear that in mind when comparing prices. The 2019 iPad 10.2-inch model prices start at $329 / £349.

You get a larger screen here for similar money though in all fairness and the resolution is a little bit sharper too. If you're keen to use an iPad a bit like a laptop too you might also like the how Apple has added a Smart Connector to its cheapest iPad so it now supports the first-gen Apple Pencil and the official Smart Keyboard Case like the much more expensive Air and Pro models in the series.

The new iPad will also launch with the new iPadOS installed too. This marks the first time Apple has designed a bespoke operating system for its iPads rather than use a similar version to that found in its phones. iPad OS will also be added to all other iPads highlighted on this page as a free update too though.

Apple's 2018 9.7-inch iPad is very similar to the excellent model released in 2017 and arguably not really worth the upgrade if you have that one to be honest. The main new feature here is the Apple Pencil support, a feature usually reserved for the far more expensive iPad Pro models. That pencil doesn't come cheap though and has to be bought separately at £89/$99 - or you could get a third-party one for far less. The newest standard iPad is still a fantastic tablet though and is slightly bit faster and more powerful than the 2017 model thanks to the new A10 chipset.

Very powerful and far cheaper the the Pro

The new iPad Air is the first in the line we've seen since the iPad Air 2 in 2014 and given we had a thin 10.2-inch regular iPad released not so very long ago we thought we wouldn't see the name again. But this one has been worth the wait.

That's because it's been given a significant performance boost, that makes it closer to the (far more expensive) iPad Pros than the regular iPads. The new iPad Air (2019) includes high-end chipsets and processors and also supports Apple Pencil and the Smart Keyboard.

Prices for the new 2019 iPad Air start at $499 / £479 / AU$779 / AED 1999 for the standard 64GB version with prices shooting up for the larger 256GB or cellular versions. The pixel density on the retina display is very close to that found on the iPad Pro 11 and you're getting the same True Tone technology which will adjust the screen's brightness to the optimal levels for your environment.

The classic makes a comeback

While you'd be forgiven for thinking the design hasn't changed an awful lot over the years, you can spot the new version over older iterations via the improved spec. The stunning new retina screen has a 2048 x 1536 resolution, which is seriously intense for a 7.9-inch screen. The battery will keep you going for a superb 10 hours of  web surfing and media playback. You're getting most up-to-date OS and brand new A12 Bionic Chip that even outstrips the most recent regular 9.7-inch iPad.

If the standard-sized iPads are a bit too big for you to handle casually or take up too much space in your bag, but you really want something bigger than your phone for long reads, browsing the net or watching video content, the latest iPad Mini is going to take some beating as one of the best devices you can get.

With most products you'd be able to save a large sum by picking up the last-gen version, but the iPad Mini 4 prices aren't an awful lot cheaper and that's for renewed/refurbished stock stock too most of the time. And considering it was released in 2015, you really are better off paying a bit more for the latest model.

The 2018 iPad Pro marks the biggest change to the display since the original model. The edge to edge LCD screen has been achieved rounding its corners and using a liquid retina display similar to that found in the iPhone XR. Apple has managed to create an 11-inch display, while keeping the chassis-size of the previous 10.5-inch iPad Pro thanks to a dramatic reduction of the surrounding bezel. The 120Hz display now comes with Face ID for unlocking too. The iPad Pro now comes with a modern USB-C connection but no longer has a headphone port.

The new A12X bionic chipset makes the 2018 iPad Pros the most powerful yet and Apple’s really aiming for the professional creatives here with a big emphasis on how well the new Photoshop for iPad Pro works. It will effortlessly handle hundreds of high-res Photoshop layers with no lag. Apple also claim the iPad Pro is faster than 92% of other portable PCs. So it won’t surprise you to hear that the newest 11-inch iPad Pro has a high price to match the high spec with the entry level 64GB model’s prices starting at $799 / £769 / AU$1129.

The best iPad for creative types

The 12.9-inch iPad Pro for 2018 enjoys the same new full-screen treatment as the new 11-inch version and looks spectacular too. The obliteration of the bezels of old, while keeping the screen-size at 12.9 inches actually means the new iPad Pro is smaller in the hand and lighter than previous version of this screen size. Internally, it comes rocking the same upgraded tech as the 11-inch model mentioned above - it's an absolute powerhouse for creatives.

A bigger screen makes it even better for seeing your work and the new USB-C connection makes it ideal to connect modern external displays. The new iPad Pros can even support 5K displays. It’ll come as no surprise that the 2018 64GB 12.9-inch iPad Pro prices are far from cheap, starting at $999 / £969 / AU$1529.

The one and only iPad Pro in this size

The 2017 10.5-inch iPad Pro has been discontinued now in favor of newer models, which is a shame as we quite liked the unique 10.5-inch size. You can still buy it from other merchants though, although it'll be increasingly difficulty to find new stock soon. You might get a nice discount on the way though.

This iPad Pro model use an A10X processor, the older 9.7-inch version ran on the A9X chip. It's a faster processor than the older model although the performance boost isn't huge to be honest. The rear camera gets a modest megapixel boost and the front camera gets a bigger upgrade for a much clearer FaceTime experience. The 2017 iPad Pro screens now benefit from smaller bezels and an improved display - although the 2018 updates blow it out of the water now with even thinner bezels.

The 12.9-inch 2017 iPad Pro is no longer supplied by Apple directly, but other retailers still have stock available and it costs much less than the newer versions, so it's certainly worth considering if you're after a cheaper iPad Pro price.

The iPad mini 4 is widely regarded as one of the the best 7-inch tablets ever made. Apple has only just stopped making it now that it's finally rolling out a new version.

It may look the same as the mini 3, but it's been slimmed down from 7.5mm to a wafer thin 6.1mm. It's also more powerful, has a stunning screen and the battery is still a 10-hour beast. The A8 processor was a good step up from the A7 inside the mini 3 so if you're going to play 3D games or throw around some of the more hefty iPad apps from the App Store, this is certainly your best option - all while being neat and compact.