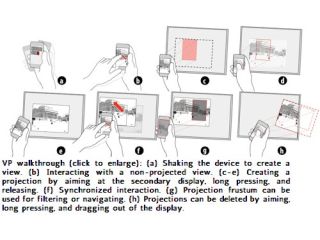 Now you can project TechRadar over Corrie

A team of researchers has come up with a way to virtually project a smartphone's screen onto nearby external displays.

Smartphones have become so powerful that there are times when it would be great to be able to easily hook into external displays to share media, collaborate or just give your eyes a break.

Carrying around a selection of video cables or a pico projector doesn't quite seem like the solution.

Taking a leaf out of the "you can't do that!" scenes from many a movie, a team of researchers has come up with a way to beam a smartphone's screen onto any nearby external display.

In augmented reality fashion, the system relies on tracking where the phone is being pointed using images from its camera.

Pick a screen, any screen

These images are then compared to constantly updated screenshots taken from connected displays by a central server, allowing the system to work out which screen you're pointing your phone at, where on the screen and at what angle.

Screen contents can then be locked in place on the external display and further manipulated from the phone – whether that's zooming in on a photo, using the phone as a media remote for video or navigating on a map.

You can watch the virtual projection demonstration video which shows the impressive results.

More than one phone at a time can project its contents onto one display, and this is one demonstration that we think could really have some potential.