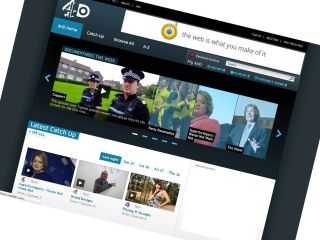 Channel 4 has announced that it is looking into using new smart app technology to bolster its 'second screen' plans, revealing that we will soon be seeing apps that automatically switch on when certain shows are on television.

Speaking at the Westminster Media Forum, with TechRadar in attendance, Dan Brook, marketing communications at Channel 4, explained that dual screen – essentially piping content to a smartphone or tablet when a TV show is on – was a big part of Channel 4's plans and it is looking at ways to innovate this technology for the future.

"We have a remit which is given to us by parliament and a significant part of that is to innovate and 'dual screen' is a big part of that," said Brook.

One hint at what is to come involves something called 'automatic device integration'.

"It uses an audio signal that users can't hear," explained Brooke, "which will power up an app on your smartphone.

"This is coming down the slipway and should be with us within a year or two."

We're waiting to hear back from Channel 4 about exactly how it sees this working - presumably push notifications or a similar system will get around phone lock-codes and the like.

Skip back to the present day and Channel 4's current second screen services for some of its most popular platforms are doing extremely well – with 12 per cent of Million Pound Drop's entire audience actually playing along online.

When it comes to 4oD, its views are up 16 per cent with the broadcaster reaching 427 million views over all of its VOD platforms in 2011.

A spokesperson for Channel 4 has confirmed that it is indeed looking at this technology and explained to TechRadar that it uses a technique called 'audio watermarking' which can be added to programmes - this signal can then be picked up by a second screen device.

As of yet there is no official word on what programmes would use this technology, however.