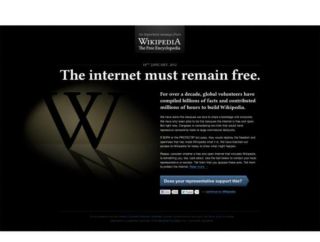 Wikipedia founder Jimmy Wales has announced that the English language version of the site will go dark for 24-hours on Wednesday to protest a pair of internet censorship bills.

Wales says the global shutdown will commence at midnight on the Wednesday 18th January, Washington time, to take a stand against the controversial SOPA and PIPA bills. That's 5am GMT.

Instead of the page entries, the site will simply redirect to a single page with a banner stating "The internet must remain free" along with a message explaining the perils of SOPA and PIPA.

Freedom must be demanded

"I am just starting to do press interviews about the upcoming blackout of Wikipedia to protest #sopa and #pip ("Protect IP")," said Wales on Twitter.

"This is going to be wow. I hope Wikipedia will melt phone systems in Washington on Wednesday. Tell everyone you know!

""Freedom is never voluntarily given by the oppressor; it must be demanded by the oppressed." MLK - on Wednesday, Wikipedia demands," he added in a series of tweets on Monday.

The Stop Online Piracy Act, and Protect Intellectual Property Act currently being debated in the US Senate would give content providers the right to have websites shut down if they believed they were infringing on copyrighted material.

However, the scatter gun approach would likely see innocent parties targeted, while start-ups and IT jobs would be hit hardest if either bill were to be written into law.

Wales believes that SOPA is currently "crippled," albeit not dead, while PIPA remains very much alive.

Many, including Google founder Sergei Brin see the bills as a threat to freedom of speech.

Wikipedia is the latest in a number of high-profile sites to suspend their services in protest. The likes of Reddit, Destructoid and the Cheezburger sites will also go dark.