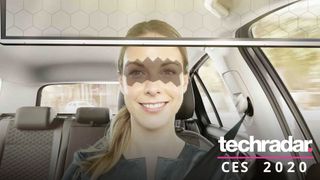 At CES 2020 in Las Vegas, Bosch unveiled a new AI-powered sun visor that prevents you being dazzled, without obscuring your view of the road.

Driving a car and being temporarily blinded by the glare of the sun can be a scary and dangerous experience that happens all too often in certain weather conditions. If you’ve spent any time behind the wheel, or even as a passenger, then you’ll know just how dazzling the sun can be on a bright clear day. It’s a bit of a nightmare.

However, while being blinded by glare is a year-round issue, matters tend to be made worse during winter time when the sun is lower in the sky and the weather is generally that little bit more lousy. Indeed, the problem can also be exacerbated when the sun hits wet road surfaces to create a double whammy of dazzle. If you’ve experienced it while driving then you’ll know just how quickly it can happen and it’s not always expected either.

While vehicles have long been fitted with fold-down sun visors, this clunky solution is pretty old school and far from ideal. Although most visors can be adjusted, you can't always get them at the best angle for reducing glare from the sun. We’ve all had to put up with this annoying issue for years, but Bosch has been working on a potential solution that uses AI to tackle the problem.

This funky innovation is called the Virtual Visor, which is a transparent LCD panel that intuitively blocks out glare as you drive, as well as delivering a clear view of the road ahead. That’s one up on the traditional sun visor that often obscures your view and can cause people to have collisions as a result. According to research by the AA one in 50 accidents are due to glare from the sun as people drive, so its development is welcome news indeed.

The Virtual Visor is actually a combination of ideas and technology. The transparent LCD panel is the main element, but there’s also a camera that intuitively monitors the driver and passenger too. Bosch revealed to TechRadar at CES that this tech duo then uses computing power to solve the glare issue by calling upon intelligent algorithms to adjust the visor and its glare-busting powers dynamically as it identifies shadows on the face of the driver.

The core of the system uses AI to work out the landmarks on the face such as the eyes, nose and mouth in a sort of scanning process that, in turn, uses those algorithms to work out the driver’s eye view.

Once it’s done that, the Virtual Visor gets adjusted to darken only the areas of the screen that are hitting the driver’s eyes. The big bonus in that respect is that the rest of the visor remains transparent. And that, of course, means you don't get an obscured view of the road ahead.

“We discovered early in the development that users adjust their traditional sun visors to always cast a shadow on their own eyes,” said Jason Zink, technical expert for Bosch in North America and one of the co-creators of the Virtual Visor. “This realisation was profound in helping simplify the product concept and fuel the design of the technology.”

Rather bizarrely, it sounds like this particular innovation was initially developed using leftover tech. One that its creators reckoned could provide them with a starting block to build on. “Like many early-stage ideas, we were working with limited capital and resources,” said Zink. “The original prototype, we used to first pitch the concept, was made from an old LCD monitor we recovered from a recycling bin.”

A group of three powertrain engineers, led by Zink, developed the idea for Virtual Visor and subsequently created prototypes in their free time in order to secure internal funding for the project concept. And, according to the team, it seems that the creative use of liquid crystal technology that can be used to block specific light sources might as well come from a recycled LCD screen as anywhere else. From those humble beginnings the team might actually have come up with a really practical solution to an age-old problem.

TechRadar got a chance to see the Virtual Visor at CES and it seems like a very welcome innovation that could, with some refinements, become a real thing. The idea certainly seems to have got the backing of those who have experienced it, with the Virtual Visor picking up an honorary Best of Innovation in the CES 2020 Innovation Awards as well as a Best of Innovation for the In-Vehicle Entertainment & Safety category accolade.

Admittedly the Bosch Virtual Visor is still a physical thing that’s there hanging from the roof of your car, but it’s definitely a step forwards and far more efficient. “For most drivers around the world, the visor component as we know it is not enough to avoid hazardous sun glare – especially at dawn and dusk when the sun can greatly decrease drivers’ vision,” said Dr Steffen Berns, president of Bosch Car Multimedia.

“Some of the simplest innovations make the greatest impact, and Virtual Visor changes the way drivers see the road.”