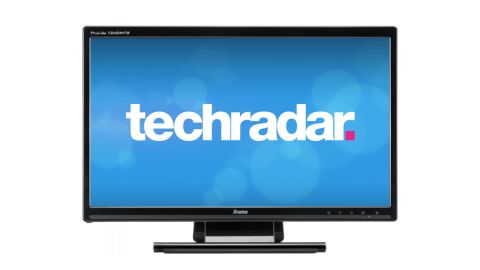 Iiyama's optical touch tech needs some work before it's ready for the prime time on the desktop.

Is touch the final input frontier for the desktop PC? Time to fire up the new Iiyama T2451MTS, a 24-inch, Full-HD touch-enabled widescreen monitor and find out.

It's certainly easy to understand why you might want to add touch functionality to a conventional PC. Whether it's smartphones, tablets or tablet-laptop transformers, touch is where all the exciting stuff is happening when it comes to interfaces and user input.

Even Microsoft is finally taking touch seriously. Windows 8, due out later this year, is the first mainstream Microsoft operating for desktops to include a fully developed and truly usable touch interface.

Of course, touch input on a 24-inch PC monitor is never going to be quite the same experience as a 10-inch tablet or a pocketable smartphone. For starters, instead of familiar resistive or capacitive touchscreen tech, the Iiyama T2451MTS uses optical touch technology.

In simple terms, that involves a ring of infrared emitters and sensors located in the screen bezel. In fact, thanks to optical technology, you don't actually have to touch the screen surface. Making swish, swipe and poke gestures near the screen surface is good enough.

If that sounds like the touch response is a bit vague, think again. The Iiyama T2451MTS is an extremely accurate and responsive touchscreen. That includes multi-touch gestures such as manipulating photos or zooming in and out of web pages.

It's very close in feel and response to a capacitive screen - assuming you make contact with the screen surface that is. It's also extremely simple to set up. No drivers are required. Just plug it in via video and USB links to any Windows 7 or, indeed, Windows 8 machine and you're good to go.

There is, however, a snag. The use of optical tech requires a raised screen bezel which in turn makes it difficult to reach the very edges of the screen with your finger tips. Unfortunately, much of the new Windows 8 Metro touch interfaces relies on the use of sweeping gestures from the screen edge to reveal various functions and menus. And this simply doesn't work well on the Iiyama T2451MTS.

In mitigation, Iiyama does provide a stylus which makes the Metro menus a lot more accessible, even if that rather defeats the object of a touchscreen. Moreover, Iiyama does not market the T2451MTS as Windows 8 screen. It's described as optimised for Windows 7.

Problem is, the Windows 7 touch interface is uniformly awful. Exactly what, therefore, you should use this screen for isn't entirely clear. That's a shame because along with the accurate touch response, it's not half bad as a conventional monitor.

OK, the panel use TN technology, so it's not as accurate nor offers the viewing angles of the latest and greatest IPS screens. The backlight could do with a bit more oomph, too.

But as TN panels go, the colours are rich and vibrant, the blacks reasonably deep and inky. It also performs surprising well in our suite of test images. Both black and white scales reveal plenty of detail, for instance. Like pretty much any TN screen, pixel response is speedy, too.

All of which makes the Iiyama T2451MTS an interesting and mostly quite capable screen that's struggling to justify its existence. Windows 7 is a poor touch experience. The optical touch technology is a poor match for Windows 8. And if you're not going to use the touch functionality, you can buy much nicer IPS screens for the same price.