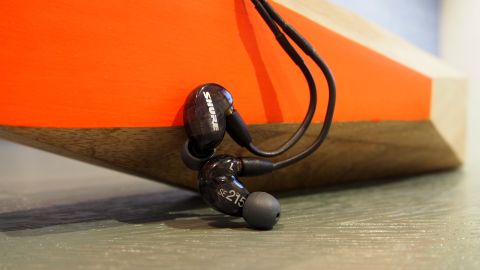 Looking to step up your earphone game on a budget? The Shure SE215 deliver stunning sound and personalized comfort at an entry-level price. It's one of the best deals out there.

For those constantly on the move, there isn't a more accommodating type of headphone than those of the in-ear variety. Their discrete form factor lends to unparalleled portability and better yet, they are increasingly being stocked with impressive sound performance. What's not to love?

Well, nothing except the glaring fact that a ton of people still use the shoddy, uncomfortable and tinny-sounding earbuds that came with their smartphone. It's a tough truth to swallow, but here's an easy solution: ditch 'em for something better.

And what better in-ear headphones to start with than an option that excels in nailing the touchy blend of comfort, performance and value: the $99 (£85, about AU$129) Shure SE215.

If you are willing to jump ship and leave those smartphone throw-aways behind, you might notice that the Shure SE215 don't really look like other earbuds. That's because these aren't earbuds, but earphones, to be precise.

What's the difference? Aside from being the real step-up in performance that they are, in-ear headphones like the SE215 take on several meaningful design adjustments in order to fit extra hardware inside the earpiece.

An earbud is typically shaped to be wedged into the outer part of the ear canal, just far enough inside to achieve minimal noise isolation, but not deep enough to provide rich sound performance. On the other hand, most earphones, including the SE215, achieve excellent noise isolation because they slip inside the ear further.

Also unlike earbuds, the SE215 packs its guts into modules that branch out from the earpieces. These appealing little translucent, plastic grey parts take on the mold of the large cavity that exists just outside of the ear canal. Comparing its appearance to hearing-assistance devices wouldn't be out from left field. The modules aim to rest comfortably in the outer ear while the earpiece is stuck inside your ear.

Each of the earphones are tethered to a cord with a few more unique tweaks to the standard earbud formula. First of all, the cables are detachable. This isn't exactly a trait that's all too common among earphone in the market, but it's one that could make repairs down the road easier.

Perhaps the biggest shocker in the design of the SE215 is that, like the RHA T10i, the cables orient upward and cradle around the ear. It makes perfect sense, too. With earphones this hefty, gravity would have its way with the SE215 at every step.

I wish there were more features to touch on – specifically, in-line controls. Unfortunately, those are missing here, which means that you can't control your music player without having it in hand.

Included with the purchase is a slick zip-up case and several replaceable earpieces in case the default size doesn't gel with your ear canal. The smallest ones worked best for me.

The SE215 may be more obtuse than your average earbuds, or even some IEMs for that matter, but Shure packed some fantastic drivers into that extra space. And while the radical shift in design might be tough to adjust to if you're used to stock earbuds, the Shure SE215 will assuredly (ahem) help you feel welcome with the excellent audio performance that it can pump out.

The overall sound signature is neutral, but is versatile in providing coolness and warmth to songs that need it. The treble isn't brash on rock and pop songs and the bass response, the earbud's biggest weakness, is accurate and triggers with a good amount of "oomph" in these in-ear monitors.

First encounters with the Shure SE215 might feel a bit like corralling a wild horse. It did for me briefly, but I eventually caught my stride and now I can pop these into my ears just as swiftly as I would any old set of in-ear headphones.

For me, the trickiest part of the routine wasn't finding a comfortable fit, as Shure designed the modules to fit like a glove and the included interchangeable earpieces range from small to large. It also wasn't tough at all to bend the ear hooks to an angle that gently cradles my ears. The biggest pain was adjusting to the Shure SE215's lack of in-line controls. While it's not a deal-breaking omission for me, it's a puzzling one for sure.

Buying into the SE215 will get you excellent build quality and sound performance, all wrapped in an appealing price tag. The fit might be different from what you're used to, but these are almost a no-brainer.

That is, if you can overlook the lack of in-line controls. It doesn't take much away from the incredible value here, but it does nick away at its usability in a crowded bus or subway car if you have to get your phone out to change songs and adjust volume.

However, for an additional $50, Shure offers the cable with full inline controls and microphone that can be easily swapped in place of the default. This indeed remedies my problems, but it'd be better if it were included in the retail package instead of requiring listeners to buy into a solution.

The Shure SE215 is an attractive value when you consider what's being offered up for under $100: clutch noise isolation, stellar performance and comfort at an entry-level price. If you can open your mind up to a different approach to the in-ear headphone, you're in for a treat.