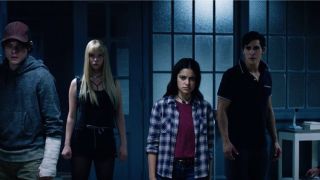 The first trailer for X-Men spin-off The New Mutants was released all the way back in 2017, and now, over two years later, the movie has finally re-emerged with a new trailer ahead of its April 3 release date (April 10 in the UK).

It's not that exciting as movie trailers go, and if you took the mutant part out of it this would arguably look like a hundred other teen horror movies set in a spooky facility with jump scares.

You'll recognize a few faces in there, such as Maisie Williams from Game of Thrones. She's playing Wolfsbane, while Charlie Heaton of Stranger Things fame plays Cannonball, another less prominent X-Men character. One mutant of note in the trailer is as Illyana (Anya Taylor-Joy), AKA Magik from the comics. Her surname is Rasputin, because she's the sister of X-Men character Colossus, seen most prominently in the movie Deadpool.

The New Mutants is set in a remote hospital where each of the mutants in question are being watched by psychiatrists. When this place begins to pose a threat, they'll work together to survive and escape.

As ever, Fox's X-Men movies live in a weird place, with some of them seeming to connect continuity-wise while others don't. But there's no denying that this looks pretty different from anything Marvel Studios has made so far in its ever-expanding universe, which was the upside of the mutant-focused movies being controlled by another studio.

The New Mutants has been the subject of rumors about reshoots, but according to director Josh Boone this is the original version of the movie he shot. "I wouldn't be promoting it here if it wasn't," the director said in response to an Instagram comment.

After this, the next proper X-Men movie will arrive as part of the Marvel Cinematic Universe, but it'll be a "very long time" until that happens, according to Marvel's Chief Creative Officer Kevin Feige. However, a break doesn't seem like a bad thing, given how poorly last year's Dark Phoenix was received – that was the lowest-grossing X-Men movie ever at the box office, making just $252.4 million worldwide.