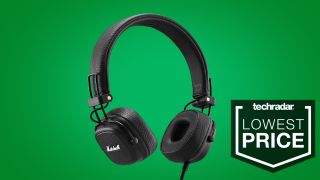 Haven't nabbed a headphones deal for Black Friday yet? The Marshall Major III Bluetooth headphones are at their lowest price yet, meaning you can get the on-ear cans for only £69 – a small drop from the previous £89 sale pricing, but still a massive price cut compared to the original £129 RRP.

If that's still too expensive for you, you can also get the wired version of the Marshall Major III headphones (without Bluetooth) for only £39 (previously £69).

The deal on both models has been running for a few days now at Amazon, though seem to still be in stock – so if you're after some good mid-range on-ear headphones at a knockout price, this may be the time to buy.

Marshall Major III Bluetooth headphones: £69 at Amazon
Foldable and stylish on-ear cans from Marshall, with a black rocker aesthetic and sturdy design. The bass can sound a bit weak, but the audio detail on mids and highs should make up for it.View Deal

Marshall Major III wired headphones: £39 at Amazon
Not fussed about the wireless connectivity? These wired headphones offer the same sound and build quality, but at an ever lower price.View Deal

We gave the Marshall Major III headphones 3.5/5 stars in our review, writing that "The Marshall Major IIIs are stylish rock-inspired on-ear headphones, with a well-balanced sound and a sturdy design. We liked the sparkly detail in the top range and the smooth mids, but felt let down by slightly feeble bass frequencies."

Marshall is a great choice for style, with a rocker aesthetic and folding cans for portability when on the move. The lower frequencies aren't quite as strong as the mids and highs, but the quality is generally pretty high – and at this price, it's hard to argue.

If you're not in the UK, you can see today's best Marshall headphones deals on these devices below: