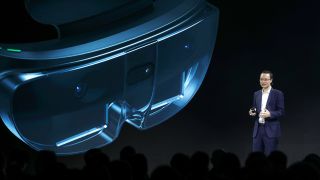 We've been hearing rumors about Apple's AR glasses for some time, but it looks like they may not arrive until 2021 or even later. If you don't want to wait until then to get your hands on some smart specs you've got a few options, and Chinese tech brand Oppo just announced one of the most interesting-looking devices yet.

The company unveiled the glasses at Inno Day 2019, its annual tech conference in Shenzen in China, where it also showed off some new true wireless headphones, and teased the Oppo smartwatch.

The AR goggles are packed with high-tech optics and sensors. There are two fisheye lenses, as well as a time-of-flight (ToF) lens that's used for depth sensing, and a standard HD camera, and this quartet of cameras should be capable of delivering a range of AR experiences.

The glasses also come with 3D surround sound for a fully immersive audio-visual experiences, which could make them especially attractive for gaming.

Announcing the smart glasses, Oppo outlined three key applications for the glasses: AR 'content', 'game', and 'service'. While 'game' is fairly self-explanatory, we're not entirely sure what 'content' and 'service' refer to, or what the distinction between them is.

In a live demo, though, Oppo showed off various uses for the glasses. These included someone navigating and controlling a simulated solar system as part of an educational experience, and viewing a top-down map of the local area.

Since we're only expecting to see Apple's AR glasses in 2021, or even 2023 according to one rumor, it seems that Oppo has really beaten Apple to the punch here, especially if the glasses have enough other applications, beyond those demoed, to make them worthwhile.

We'll know for sure in the coming months, so stay tuned to TechRadar for all the latest news on both Oppo's and Apple's smart glasses.