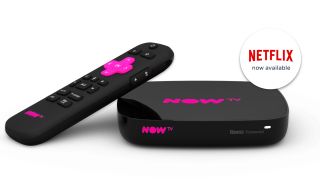 Black Friday and Cyber Monday may be just around the corner, but that hasn't stopped Curry's from lifting the covers off a whole raft of pre-sales season deals. If you're on the market for an affordable streaming box, this offer could be for you.

Before the Curry's Black Friday sales officially kick off, the retailer is slicing the price of a 4K Now TV Smart Box by almost half.

Now TV Smart Box with 4K: £24.99 at Currys
Want to watch Sky TV shows, but don't want to commit to a lengthy, costly satellite subscription? Now TV is for you, with this box letting you stream shows over the internet on a pay-as-you-view basis.View Deal

While Now TV itself only streams in 720p (boo!), loads of other apps on the box, including Netflix, stream in 4K (yay!).

The deal also offers a 1 month pass to Sky Cinema, Entertainment and a Kids Pass, as well as a 1-day Sports Pass, the combined cost of which make the Now TV Smart Box itself within the bundle effectively free.

Topping it all off, it's the latest version of the Now TV box, which means it comes with a voice search function, letting you hunt down a show without needing to type in fiddly names.