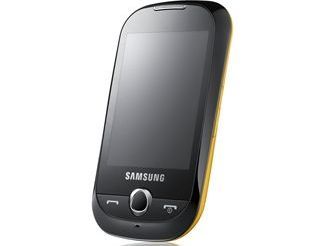 The Samsung Genio is called the Corby in other markets

Pull the Samsung Genio touch out of its packaging and you could be forgiven for mistaking it, at first glance, for the Palm Pre.

The gentle curves, the 2.8-inch touchscreen and the rounded button in the middle of the face are all heavily reminiscent of Palm's new baby.

But where you'll pay around £600 over the lifetime of a new Pre, the Genio can be had for around £100 on a pay-as-you-go contract, and the specification sheet is still pretty compelling.

Not only do you get the flavour du jour - the touchscreen - but also a 2MP camera, an FM radio and a full HTML web browser. For the fickle, it comes with three interchangeable backs.

The Genio was originally called the Corby, and was marketed as a phone for kids.

It's easy to see why - the bright colours and emphasis on entertainment rather than heavy-hitting business features such as Microsoft Exchange compatibility make it a tempting handset for youthful show-offs.

That doesn't mean it lacks power, though. There are 27 widgets included, allowing you to access services such as Facebook and Twitter, and there are 75 more available to download, making the Genio potentially the best of both worlds: an upgradeable, flexible handset with plenty of data-handling capabilities, with none of the costs associated with top-end devices such as the Apple iPhone 3GS.

Samsung has embraced the touchscreen phone, and the Genio sits towards the bottom of its nearly all-encompassing range.

While devices such as the Omnia 2 and Jet build in everything but the kitchen sink, the Genio is more pared back.

That means there are compromises virtually everywhere you look, but should any of them make bargain touchscreen hunters look elsewhere?