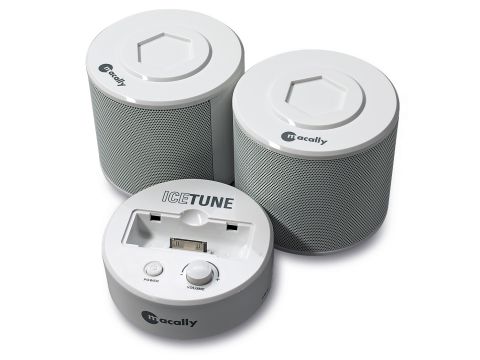 Basic but inexpensive speakers that produce okay sound. A remote would have been nice, though.

This is a tidy little speaker set from Macally, which is both fairly inexpensive and capable of producing perfectly acceptable sound.

The sound quality is clear and can reach pretty loud levels, but distorts at the top of its volumes range. You are not going to rock much more than a pyjama party, but for a small desktop environment these will be fine.

If you have money to burn and get fussy about things like warm mid-ranges you would be better off looking in some Jamo or Bose offerings.

There is no remote, which some other sets offer, but there are few omissions other than that. The two speakers and dock stack up on each other, and there are four iPod adaptor trays in the box for 3G, 4G, photo, mini, nano and video. The dock on top of the Icetune will work with or without a tray, so any iPod with a 30-pin dock connector with work.

It charges as it plays, and when stacked uses only a small amount of desk space. There's also a 3.5mm line-in jack, so you could use these speakers as laptop speakers, too.

The only things you get on the Icetune itself are an on/off button and volume control. A neon blue light shines out from under the dock and you are unable to turn it off, so there's also a 'pimp-your desktop' feel happening here that you may or may not warm to. Apart from this, though, it has traditional Mac looks with its hospital-white cleanliness.

We played with it for about a month and experienced no drawbacks. Macally is good at making simple, reliable products.

Our only complaints are the lack of a remote, which is something we use a lot on other, similar models, and that it picks up feedback from incoming calls to mobile phones. Also, the general build quality lacks the precision of the more expensive brands. James Ellerbeck