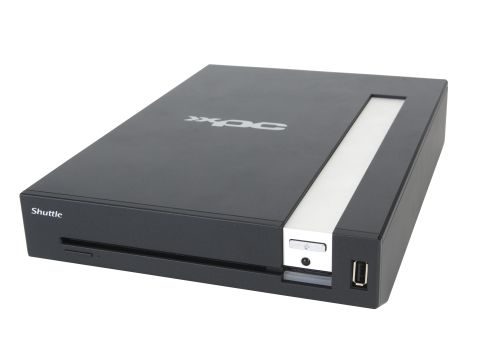 It's compact and stylish. It's also pricey and underpowered

Expensive and disappointingly limited in scope

Shuttle pioneered the small-form factor PC, and we're sure there are plenty of those shoe-box sized systems up and down the country. So it's refreshing to see the company is trying something new with this slimline, stylish PC that brings innovation to the media centre fold.

There are a couple of prerequisites for PCs that are designed to sit in your lounge. It's got to look like it belongs next to the TV, and it has to be as quiet as a church-going rodent.

The 200M scores on both counts. From the front it looks like a digibox, and only when you press your ear to the case can you hear a gentle hum. The latter point needs a little clarification: the PSU is external and so Shuttle can get away with not fitting fans in the case, elsewhere, the optical drive is a little noisy when playing DVDs.

The lack of a standalone graphics card also contributes to the system's hush, although this brings its own disadvantages - more on that later.

It's mostly good news when it comes to connections on the 200M. Five USB2 ports is a good start and because there are PS/2 ports for a keyboard and mouse, you won't lose two of the five from the get-go.

Elsewhere, there's an antenna for wireless sharing of data, TV tuner and FM inputs and, interestingly, a solitary DVI port. That's right, the lack of any analog video output - S-video, component or composite - means that if your TV doesn't have a DVI input then you'll need a DVI-to-HDMI adaptor to see Vista on your digital TV. Those that don't have a digital TV are left firmly out in the cold.

If you're able to connect this system to your TV then you'll want to record programmes on its capacious 300GB hard drive. It's a standard 3.5-inch SATA model; going for a laptop-sized 2.5-inch drive would have freed up some internal space for extra functionality - a standalone graphics card, perhaps.

However, media centre PCs need plenty of disk space and larger capacity 2.5-inch drives command a premium, which would have added to an already expensive price point.

This system came with Vista Ultimate edition, although through Shuttle's online system configurator you can save a few pounds by choosing Home Premium, as well as alter other aspects of the 200M.

There's more than enough RAM to run Microsoft's behemoth of an OS, although viewing Vista on a high-resolution TV could prove problematic thanks to Shuttle plumping for a mobile version of the Core 2 Duo processor and the onboard graphics.

Granted, you're not going to be playing 3D games on a media centre system, but why hobble the 200M from achieving its primary task - video playback in the hi-tech homes of the 21st century lounges? Notice that we haven't mentioned the monitor, keyboard or mouse. That's because they're not included as standard.

A half-decent remote doesn't really make up for this deficit.

Overall, we think that £900 is a lot for the 200M. Its size, storage capacity and unobtrusive noise levels are plus points, but with limited TV connectivity, average CPU and graphics performance this isn't an essential purchase, by any stretch of the imagination. File under "luxury item".