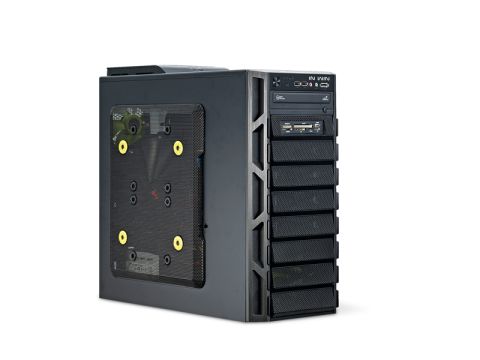 The HD 5870 takes the gaming plaudits, but the CPU holds it back in processing terms

Here we have a new, fully AMD based offering from PC Specialist in the form of the Fusion HDX 965 desktop gaming PC that costs a perfectly agreeable £900. Things are beginning to get crowded at the £1,000 price point.

A couple of months ago, YOYOtech's Warbird i750 picked up the coveted PCF Gold Award with an £800 HD 5850 Core i5 machine and last month the Cryo Quad i5 made the logical step of propping up a similarly specced rig with an HD 5870 and reaped the rewards.

This month, PC Specialist has landed in the middle with a full AMD rig to take them both on. The key to this Fusion HDX 965 is the HD 5870 humming away in the depths of the surprisingly colourful In Win chassis. That's the component that's garnering the impressive gaming performance stats, and marks this machine out as a quality, mid-range gaming rig.

So it's the racehorse chic of the high-end graphics card that's going to be getting a lot of the attention then, but it's the other AMD components sitting in this sensibly built little PC that have enabled PC Specialist to hit the heights of graphical splendour and still keep the price this far below £1,000.

The top CPU from AMD is still less than £150, so that frees up a lot of the budget, and the AMD 770 chipset motherboard is a bargain too. The switch from Core i5 to Phenom II has kept costs down, but there's a massive performance hit on anything remotely CPU-intensive.

There's none of the i7 Hyperthreading to contend with, giving us a straight quad vs quad fight, but the i5 is the phenomenal processor and makes the Phenom II look like a midget with a limp compared to the long-legged Intel sprinter.

But for a gamer, this is less of a concern than the performance of the GPU. Thanks to the way in which multi-threading is handled in PC games (generally not at all in-game), the Phenom II is able to keep pace, with the HD 5870 doing most of the grunt work.

That said, the Warbird with the HD 5850 and Core i5 gets close to the performance of the Fusion, so you end up with a conundrum. In gaming terms you're only dropping single-digit framerates with the Warbird, though the lack of a bundled OS means you'll be paying the same price as you would for the Fusion.

In processing terms though, the Core i5 is a generation ahead of AMD's best chip and the 1156 socket should give you a modicum of future-proofi ng. The Fusion has no factory overclocking, so some judicious tweaking could push those figures up.

However, the 965 doesn't have the headroom you'd need to match Intel. In sub-£1,000 terms then, the Warbird still has our vote, but if you've got a little more ready cash then Cryo's Quad i5 has the aspirational end sewn up.