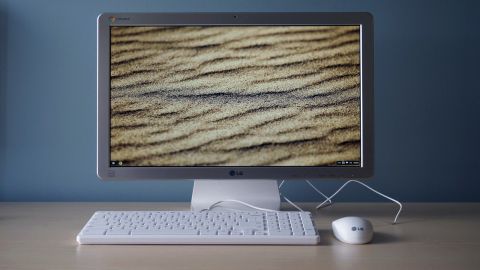 The LG Chromebase isn't quite a high-polish experienced, but if you're willing to (or already have) hand over your computing life to Google, then this all-in-one PC is an exceptional value.

The growing popularity of inexpensive Chromebooks has at least one computer maker asking, "Can the lightning strike again on the desktop?" LG is among the first to test those waters with its LG Chromebase, an all-in-one PC that uses Chrome OS as its operating system.

Standard features include built-in Bluetooth 4.0, Wi-Fi 802.11 a/b/g/n, and an Ethernet port. There are also three USB 2.0 ports in the back (two of which will be occupied by the keyboard and mouse), a USB 3.0 port on the side, and an HDMI-in for external devices. The machine is powered by a 1.4 GHz Intel Celeron 2955U processor with 2 GB of DDR3L memory.

It doesn't sound like much, but it's more than enough to power Chrome OS. All of this is topped off with a 16GB SSD, which might never be filled, since the system relies heavily on cloud storage for files.

Given the desktop's extremely low price, coupled with a decently sized screen, it's very tempting to pick it up and immediately dive into everyday tasks, like email and web browsing. The only catch is that (if this is your main computer) you'd have to give over your digital life over to Google. Every app available is obtained through the Chrome Web Store, and any media that can't be streamed through the Chrome browser must be handled through Google Play.

Despite its relatively slim hardware specs, the Chromebase is fast. It boots up in just a few seconds, then you can log into your Google account and get right into using it. However, the reason for its speed is very apparent: Chrome OS is about as minimalist as it gets.

The OS employs a very Windows-like interface, replete with desktop wallpaper and task bar, but it's an illusion. Nothing can be saved to the desktop – it's just there for the wallpaper. You can assign different Chrome apps to the toolbar, but you can't drag website shortcuts to it unless they exist as Chrome apps.

Instead, everything is run entirely from the browser, which has a lot of benefits. Namely, since the browser doesn't need a lot of horsepower, the hardware is very inexpensive.

There are plenty of apps available for both work and play. Plus, users can take advantage of Google and Chrome's many cloud-centric features, like browser tab sharing across devices, automatic updating and cloud storage for music, photos and other files. (Google offers 100GB of Google Drive storage for free for 2 years with the purchase of a Chromebase.)

To put a Chrome-heavy digital lifestyle into perspective, word processing and other productivity tasks are most easily handled by Google Docs. That is, unless you prefer – and are willing to pay for – different apps or a Microsoft Office subscription.

Google Hangouts is the video chat app of choice, rather than, say, Skype on Windows 8.1 machines. iTunes is out of the picture entirely, but Amazon Prime customers can still access streaming video and music through its web players. You'll have to upload your music to your Google Play account if you want to use the Google Music Player. Games are also limited to in-browser titles and whatever you pick up from the Chrome Web Store.

While there's flexibility in Chrome OS, which is bound to grow with computing in general trending toward web and cloud-based applications, this operating system simply cannot yet match the versatility of a Windows or Mac system. Additionally, everything is a tab in the Chrome browser. This isn't a huge issue, but I missed being able to organize, launch and manage applications from the taskbar. Especially music player controls.

Chrome OS, and the Chromebase by extension, is clearly designed for users with fairly basic needs. If you're into more instense work that requires a good deal of processing power or specific software, then you're probably better off getting an Apple 21-inch Mac or Windows all-in-one PC.

If you'd rather save a couple hundred dollars and can learn to live with using Chrome and web applications to fulfill your needs, then a Chromebase will work for you just fine. To be fair, there are some excellent Chrome apps out there for basic photo and video editing.

Photoshop for Chrome OS, for one, has been been in the works for some time. Announced in September, Streaming Photoshop is a joint effort by the two companies to provide access to Photoshop on Chrome OS devices via the cloud.

It means that you will be able to tweak files stored on Google Drive without needing to download and re-upload files. It's not available just yet, but the initiative shows that Chrome OS is constantly evolving to let you do more tasks that are possible on Windows and other operating systems.

In addition to new web apps like Photoshop, an increasing number of Android apps are making their way over to Chrome OS. In November, Google ported seven Android apps, including Cookpad Recipes, CouchSurfing and Overdrive. They join existing offerings Evernote, Duolingo, Vine, Sight Words and others.

Next Page Features, performance and verdict