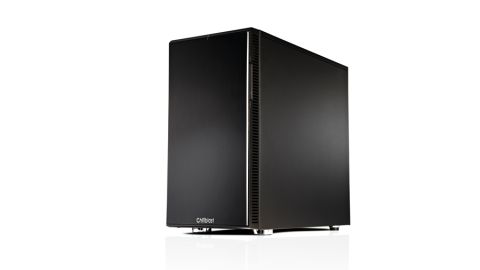 The Chillblast Fusion Stealth is a machine that's been specced and built from the ground up to be the quietest gaming PC you can put together while still nailing high performance.

I was stunned the first time I pressed the power button - the only way I could tell that it was drawing any juice was the little blue light that shone from around the button, and the monitor bursting into life. This machine is practically silent.

Sure, if you stick your ear to the chassis you can sense the thrum of active cooling and a power supply, but there's little indication of that activity on the clean lines of the Fractal Design case's serene exterior.

At idle that's pretty much what you would expect from a machine called 'Stealth', but I'd expected things to get a bit louder as I started stressing the components. Not so. Even with the CPU doing heavy video encoding, or the GPU tessellating the ever-living excrement out of Heaven's cobbled streets, the Fusion Stealth remains whisper-quiet.

Chillblast has remained faithful to the top gaming CPU on the planet right now, the Core i5 3570K, and has even seen fit to overclock it to a solid 4.3GHz.

The Tranquillo CPU air-cooler from Gelid is a chunky beast, but that means the fans don't have to spin as fast to keep it chilled. And, with the chip topping out at around 63ºC under full load, it's not like it's heating up to the point at which its life is going to be shortened.

Chillblast has dropped in one of Asus' brilliantly cooled GTX 670 cards as well, which chews through gaming benchmarks with little concern. You'll be happily gaming up to 2,560 x 1,600 without your PC sounding like it's going to take off at any moment.

This machine isn't just a bit of a gaming beast. With the 16GB RAM, 2TB of storage and powerful, overclocked quad-core CPU, you'll have no problem using this as a relatively cheap, almost silent workstation too.

I was also hugely impressed by the aptly named BeQuiet PSU. Normally the power supply barely gets a mention in my PC reviews, but the fact that it too is practically silent makes a huge difference to the overall sound of the rig. I know from my home PC that you can have all your fans finely tuned and still have an annoying whine from the PSU.

The Fractal Design armour around all those performance components is also clad in sound-dampening material, with incredibly well-tuned case fans enabling effective airflow without the tell-tale noise.

Hopefully you can tell just how impressed I am with this Chillblast machine. It may not be the absolute fastest we've seen, but it's definitely the quietest.