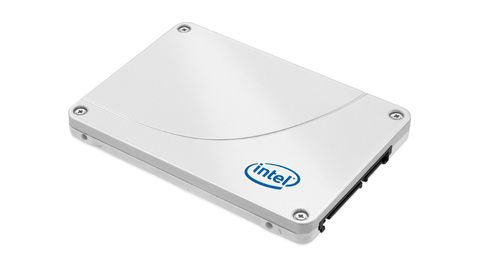 The latest addition to Intel's armoury of SSDs is the 335 Series - a competitively priced drive that's aimed at the mainstream market.

Like its little 330 series sibling and its bigger brother, the 520 series, it's based around the LSI SandForce SF-2281 controller, but unlike the other two this one uses Intel's latest 20nm MLC NAND.

At launch the 335 is available only as a 240GB capacity drive. This means Intel must see the 240/256GB area as the sweet spot for consumer SSDs, which, given the state of the consumer SSD market even 18 months ago, shows just how volatile the things have become. More capacities may appear as the production and availability of new NAND modules increases.

Just like the 330 series, the 335 comes in a 9.5mm format only, which is bit of an odd decision as it precludes it being used as a replacement drive in a thin notebook or Ultrabook, which you would think would be its perfect home.

The drive comes with a desktop kit consisting of a drive bay adaptor, SATA data cable and a Molex to SATA power adaptor, but there is no software included. Instead you have to download it all from Intel's website, including the Intel SSD Toolbox utility.

Inside the drive, the layout is identical to the 330 and, for that matter, the 520 series. This is no real surprise as most SandForce controlled drives tend to have the same layout on the PCB.

Making up the drive's 240GB capacity are 16 Intel 29F16B08CCMF2 16GB NAND modules. This, the mathematically astute among you will note, adds up to 256GB; the missing 16GB is kept for over provisioning and garbage collection.

The controller sits on one side of the board with eight of these NAND modules while the other side on the PCB contains just the eight remaining modules.

Intel quotes headline performance for the 335 at up to 500MB/s reads and up to 450MB/s writes, which we found pretty conservative. When the drive was tested with the ATTO benchmark it produced read performance of 557MB/s, and for writes a very impressive 530MB/s.

As with all SandForce-controlled drives, dealing with compressed data poses the 335 some problems, but it's not as bad as some drives we have seen. That likely shows Intel's hand on the firmware tiller.

Testing the drive with the default incompressible AS SSD benchmark settings, the drive produced performance of 484MB/s reads and 313MB/s writes. Switching to the compressed data test of the benchmark produced a healthy rise in the read figure - 512MB/s - and a rise in the write performance, producing a figure of 494MB/s.

Intel hasn't really made any great strides with the SandForce controller, but the 20nm NAND has given it a bit more of a competitive edge on incompressible data front. Still, it's not going to pip the OCZ Vertex 4 in our wish list of speedy SSDs.