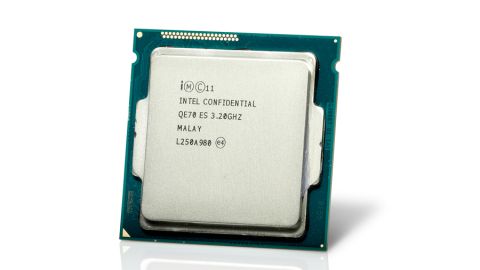 Let's get one thing straight. If you're into overclocking, step away now. The Core i5-4570 has nothing to offer you. The CPU multiplier can be tweaked a few notches, but is pretty much locked down.

The new base clock strap overclocking option doesn't appear, and the chip falls over if you meddle with the base clock itself.

On one hand, that winds us up pretty badly. Intel can only get away with all this because AMD can't compete in this part of the market. You only have to observe the fact that all AMD's FX chips are unlocked to see what a difference Intel's competitive advantage makes.

On the other hand, does overclocking really matter? Just like multi-GPU support on a motherboard, it's one of those tricky technologies that is probably more valued as an option than actually used.

The 4570 has the advantage of being a straightforward proposition. If overclocking's your bag, look elsewhere. So what's it like as a plain old processor?

As a gaming chip, it's very nice. Few games scale really efficiently beyond four threads, so the 4570 is right up there with its 4770K octo-threaded Haswell sibling. OK, the benchmark numbers betray a performance delta of about 10 per cent, but you're not going to feel that in-game.

The same applies to the comparison with the 4670K. In this case, the variation is limited to clockspeeds. So 3.2GHz plays 3.4GHz (3.6GHz and 3.8GHz, respectively, for Turbo), which is a difference of less than a 10 per cent.

Not for the pros

Things are a bit different when it comes to more efficiently multi-threaded code, like video crunching and professional rendering. This is where the 4770K's support for an extra four threads pays off. Add in the 4770K's clockspeed advantage and the result is getting on for 50 per cent more punch in Cinebench.

Of course, the 4670K doesn't have Hyper-threading support either, so it's just that 200MHz clockspeed advantage it has to fall back on. Again, all this changes if you take overclocking into account. The two more expensive chips are clearly miles ahead of the 4570 when all are running at their maximum overclock. But like we said, that assumes you're going to overclock in the first place, which is hardly a given.

Anyway, what all this really comes down to is price. The 4570 gives a pretty similar stock-clocked experience to the 4670K. If it's cheaper, it's all good, and it is, but only a little. If your budget is super skinny, that price tag could make all the difference and we'd vote 4570.

It's every bit as good for stock-clocked gaming as the 4670K, but if you can stretch to it, that unlocked multiplier on the 4670K is very seductive. Intel knows this, of course, which is why the 4670K exists in the first place. It's a classic upsell.

When you think about it in those terms, the whole thing becomes incredibly infuriating and the 4570 starts looking like a way to stick it to the man. Take that, Intel! I'm not buying your cynical K Series chip!

But in the end, it can only make sense to buy the chip that suits you best. For us, that's usually going to be the slightly pricier 4670K.